Welcome to the Age of Litigation: Rowan Williams will not put it in writing 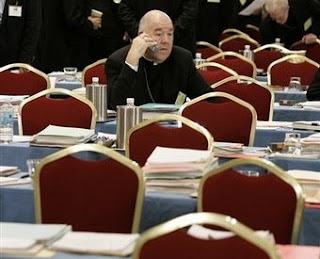 No letters? If Rowan writes a letter, it could be revealed in discovery, of course.

Other letters, written by bishops to other bishops about other bishops have also been revealed in discovery, as we noticed in Judge Randy Bellows' recent decision in favor of the Virginia Churches. Perhaps Rowan Williams would not like to see his own letters with the Lambeth Letterhead ending up in a U.S. Court, especially since several bishops who might be in question are being threatened with litigation by The Episcopal Church. Especially if those letters tell certain bishops that they are welcome to Lambeth after all. That would not not exactly aid TEC's current litigation storm. No, sir.

“In circumstances where there has been divisive or controversial action, I have been discussing privately with some bishops the need to be wholeheartedly part of a shared vision and process in our time together,” he said in his Pentecost letter. An unnamed spokesman (could it be the Ty-d-Bowl Man?) tells The Living Church that the letters got shelved for telephone calls (can't exactly put those in the box with the rest of the discovery stuff, now can you?). But the Archbishop of Canterbury might be advised not to leave any phone messages on the answering machine of some bishop involved in "divisive or controversial action." The mind boggles at the thought.

A blogger in Kentucky writes of a recent visit by the Presiding Bishop and reports that Katharine Jefferts Schori said announced "there are no plans to spend time enacting legislation at this year’s Lambeth Conference. Rather, the conference is designed to allow everyone to spend time together, get to know each other, communicate, and learn from one another."

Since The Episcopal Church has all ready made it quite clear that Lambeth Resolutions are not legislation with any binding authority over The Episcopal Church, it's hardly surprising that Bishop Schori is going around telling people that "there are no plans to spend time enacting legislation at this year's Lambeth Conference." As we know the recent TEC party line is that Lambeth has no authority to enact legislation, so what's new with that?

However, that being said - some resolutions, like some canons, are more equal than others. And a resolution to reimagine Lambeth 1.10 is certainly on the docket. It's a long way to go and a lot of money to spend just to hold hands and sing Kum-ba-ya.

If Rowan puts in writing anything having to do with the official status of bishops now under threat of litigation (as in, "we know you recently voted to separate from the Episcopal Church and join the House of [fill in the blank], but you are still welcomed at Lambeth just the same, though we do refrain from placing hotel lamp shades on your head after hours or engaging in performing spirited cartwheels across Her Majesty's lawn during the tea, and of course, please, please, don't pat the corgis") then his letters are open to discovery in court or worse - made public on the internet.

Since Rowan has shown his communications staff the door recently, it may be that the lawyers have finally moved in.
Posted by Unknown at 4:42 PM

KJS speaks as one having authority to use the phrase from Scripture...as one running the show at Lambeth?

It's for sure a fleet of lawyers is overseeing everyone and everything from the organizers to the kitchen and groundskeepers.