All the butterbeer and chai are on the house today, as well as all the cream pie and pancakes. All the regulars are at their tables with their harmonicas and the anons are throwing darts and playing pinball. Hagrid is snoozing at the door and we're baking cakes in the kitchen. Today is Bob Dylan's 67th birthday (you can send in your greetings here). And what's he doing today? He's on tour, of course - in Newfoundland. We'll get started with one of his masterpiece's - one that for years was only known as a bootleg, Blind Willie McTell. Written in 1983 around the time of Infidels, it was not officially released until 1991 in the Bootleg Series, Vol. 1-3.

Seen the arrow on the doorpost
Saying, "This land is condemned
All the way from New Orleans
To Jerusalem."
I traveled through East Texas
Where many martyrs fell
And I know no one can sing the blues
Like Blind Willie McTell

Well, I heard the hoot owl singing
As they were taking down the tents
The stars above the barren trees
Were his only audience
Them charcoal gypsy maidens
Can strut their feathers well
But nobody can sing the blues
Like Blind Willie McTell

See them big plantations burning
Hear the cracking of the whips
Smell that sweet magnolia blooming
(And) see the ghosts of slavery ships
I can hear them tribes a-moaning
(I can) hear the undertaker's bell
(Yeah), nobody can sing the blues
Like Blind Willie McTell

Well, God is in heaven
And we all want what's his
But power and greed and corruptible seed
Seem to be all that there is
I'm gazing out the window
Of the St. James Hotel
And I know no one can sing the blues
Like Blind Willie McTell


UPDATE: Looks like they are celebrating Dylan's birthday today in India, as they have been for 34 years:

Shillong, May 24: The birthday boy was missing but not the fanfare as his songs sung in the early 60s are still 'blowin' in the wind' for folk enthusiasts here.

No other city in India has perhaps been celebrating legendary folk singer Bob Dylan's birthday without a break for the past 37 years. And today, it was no different in Shillong.

Hundreds of fans of the freewheeling poet-cum-singer who inspired a whole generation, poured in at the all saints hall here to celebrate the event with much fanfare.

The musical soiree organized by the great society and the ace of spades, witnessed performances by local artistes amid the participation of school students for the first time as well as fans from outside the state.

''Why Dylan? “Why not Dylan?'' Lou shoots back when asked why Dylan alone and goes on to narrate how Dylan captured his imagination in the prime of his youth. ''He started as a nobody and went on to become one of the greatest men alive in the world of music.''

''We don't do it because we are fans but out of respect and admiration for the man,'' says Lou, the founder member of the legendary Shillong band, the great society.

Looked up Shillong at Wiki. The majority of residents in Shillong are Christians. It has a literacy rate of 80%. "Due to its latitude and high elevation," says Wiki, "Shillong has a sub-tropical climate with warm summers and chilly to cold winters.Shillong is subject to vagaries of the monsoon. The monsoons arrive in June and it rains almost until the end of August. The climate is hot and humid during summers but quite cold during winters." It has been called, "the Scotland of the East."

Of course, we know that Bob Dylan has a soft spot for Scotland, having recently acquired a house there for his brother. He also wrote yet another masterpiece called Highlands where he alludes to the Robert Burns poem, My heart's in the highlands. We think, though, that Dylan's highlands are a somewhat higher locale. 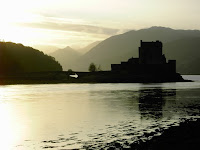 On that note, a poet has translated some of Dylan's songs into Gaelic and will be performed for the first time today in Glasgow. "Rody Gorman, who lives on the Isle of Skye, translated classics like Knocking On Heaven's Door, which a band will perform at the first Leabhar's Craic Gaelic festival in Glasgow," the Scotsman reports. We know that when Bono interviewed Dylan back in the 80s, Dylan was quite familiar with the Celtic traditions and acknowledged that he has been greatly influenced by them, beginning with his relationship with the Clancy Brothers. You can read that interview here. Now this is an excellent example of how to interview Bob Dylan and get him to open up. Bono and Dylan have been friends ever since, as Dylan writes about in his own autobiography, Chronicles.

You can hear an excellent and humorous short interview with Dylan on NPR. The direct link is here and the NPR homepage is here.

And to offer a rather stark contrast, here is an interview with a twenty-two year old Bob Dylan with Studs Terkel 45 years ago in Chicago when he was a mere folksinger out on the trail:

Tip of the TinFoil to Ryan! You can hear the rest of the interview here at Ryan's Smashing Life.

And here is an outstanding recent performance of Bob Dylan and his band. We have decided to make it the theme of our Road Trip to Lambeth (more about that coming soon). Take it away, Bob!

We just love this performance, it just gets better every time we hear it. You can hear Dylan's electric organ too - love it. It's that thin mercury sound. It just catches the spirit of the time. Yep, this is our theme song for the Road Trip to Lambeth. Out on Highway 61!

Here are some clips from the concert this past Wednesday night in Halifax. The sound quality is great, just great. Enjoy! Thanks, marisaanne88! The video is fun - it looks like Bob and his Band are just kinda hanging in space. One hint - the songs work better if you all ready know them. Then you can see how he plays around with the lyrics, the phrasing, and the arrangements. He sings now like a bluesman.
'

Okay,the Masked Tortilla has just entered the Cafe (Hagrid, sit down) and informed us that we are now linked by the Dylan Center of the Web Universe, ExpectingRain.com. For that, there will be no charge at the David Blue Memorial Pinball Machine today - or any day.

B. Dylan from Blonde on Blonde - a long way from 1963 and 2008. The video above is a montage of clips alluding to Dylan's life. Of course, we like the part where he walks up to the Gospel Choir on the steps and takes off his hat. 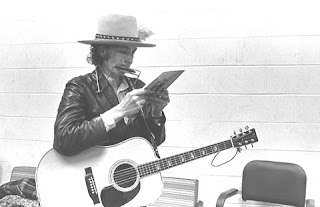 And finally, Bob Dylan is a wickedly funny humorist. There is a video that was on YouTube where Dylan is being interviewed and he presents very matter-of-fact and quiet answers, never smiling. But almost every one of his answers is hilarious - Santanta is standing next to him also being interviewed, also giving answers with a complete straight face that are out of this world. There are times when you can see that Dylan is struggling to not laugh, doing the old "Queen Elizabeth II method" to keep from breaking up.

Well here we have some gems from the San Bernardino Sun. One of the columnists there, David Allen, tracked Dylan's quips from the first season of his radio show, Theme Time Radio Hour. The humor is based on silly puns. Here's a sample: 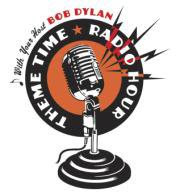 "I got a friend who's learning to become a ballerina. She's improving by leaps and bounds."

"Getting married's a lot like getting into a tub of hot water. After you get used to it, it ain't so hot."

"I once had a cross-eyed teacher who couldn't control his pupils."

"You know, I sleep at the edge of the bed. It doesn't take long for me to drop off."

"Two dogs talking. One says to the other: `You're crazy. You ought to go see a psychiatrist.' The other dog says: `I'd love to, but I'm not allowed on the couch."'

"I was having dinner with our announcer, Pierre Mancini. The only difference between Pierre Mancini and a canoe is that sometimes a canoe will tip."

"Take our engineer, Tex Carbone. He's so laid back it takes him two hours to watch `60 Minutes.' I'm the complete opposite. I can make Minute Rice in 30 seconds."

"I just came back from a pleasure trip. Took my mother-in-law to the airport."

"What do you do if you miss your mother-in-law? Reload, and try again."

"All musicians get girls, but a guitarist always has his pick."

"They got a new `dial-a-prayer' for atheists. You call it, and nobody answers."

"A lot of people don't celebrate Christmas. Like my buddy Dexter Quinn. He's an atheist. You know what his favorite Christmas movie is? `Coincidence on 34th Street."'

"If diamonds are a girl's best friend, why do so many girls get mad when you want to go to the ballpark? You tell me."

"I gave a bald-headed friend of mine a comb. You know what he said to me? `I'll never part with it."'

"My friend's wife is a really bad cook. I broke a tooth on her coffee."

"I was at a restaurant. I said to the waiter, `There's a needle in my soup.' He said, `I'm very sorry. It's a typographical error. It's supposed to be a noodle."'

"A cat has nine lives, but a bullfrog croaks every day."

"If you think the sun is too hot, just remember, you don't have to shovel it."

"In Sweden, they have a system of higher taxes, but welfare for everyone. They call it the Swedish model. Well, I could go for a Swedish model right about now."

"Here's a tip on how you can save your money. Use somebody else's."

"He opened a restaurant on the moon. It had great food, people say, but no atmosphere."

"Every day in the United States, 200 new jail cells are constructed. I hope we can keep up!"

"A giraffe can go a long time without water. But he wants to see a menu right away."

"I was having dinner the other day when the waiter came over. I said to him, `There's a fly in my soup.' And he said, `That's very possible. The cook used to be a tailor."'

And with that, here's one more for the road and we say goodnight. 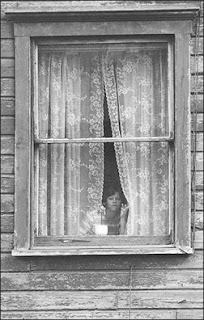 Pass me not, O gentle Savior,
Hear my humble cry;
While on others Thou art calling,
Do not pass me by.

Savior, Savior,
Hear my humble cry,
While on others Thou are calling,
Do not pass me by.

Let me at a throne of mercy
Find a sweet relief;
Kneeling there in deep contrition,
Help my unbelief.

Trusting only in Thy merit,
Would I seek Thy face;
Heal my wounded, broken spirit,
Save me by Thy grace.

Thou the spring of all my comfort,
More than life to me,
Whom have I on earth beside Thee,
Whom in Heav’n but Thee.

Tip of the Tinfoil to RWB.

Enjoyed your post right back! I don't know what it is about Bob Dylan, but he has something really special going for himself.

What a great Bob birthday post. Fascinating stuff on Shillong. Dylan's got to do a gig there one day. The Scotland of the east, indeed.

Thanks for dropping by!

Happy birthday to the legend best of luck