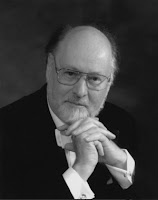 IMDb now lists renowned composer, John Williams, as the composing the film score for the upcoming installment of the Harry Potter film series, Half Blood Prince. This would definitely be a surprise since it had been announced earlier that Nicholas Hooper, who had scored the previous film, Order of the Phoenix, would be returning. IMDb also lists Nicholas Hooper as working on the film score.

The Boston Globe reports that John Williams is working on the Half Blood Prince film score, as well. Williams last work on the Harry Potter films was for the third film in the series, Prisoner of Azkaban. He also wrote the original soundtrack for the first film, The Sorcerer's Stone, which includes the highly recognizable, Hedwig theme: 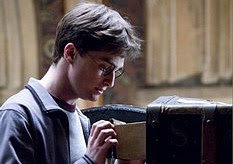 Stay tuned for updates. We're also watching for the release of the first preview. There are also rumors that there are some casting surprises. Stay tuned.

By the way, this photo (see right) was released/leaked this week and it looks to us at our table to be perhaps from the scene where Harry is put in detention by Prof. Snape after Harry's fight with Draco Malfoy. Ginny Weasley steps in to sub for Harry as Seeker for the Gryffindor Quidditch team while Prof. Snape requires Harry to recopy Filtch's old card files of Harry's father's detention-transgressions while a student at Hogwarts back in the 1970s. But that's just a guess!

Now back to our regularly scheduled programing.
Posted by Unknown at 11:14 AM