A history of Truro Parish 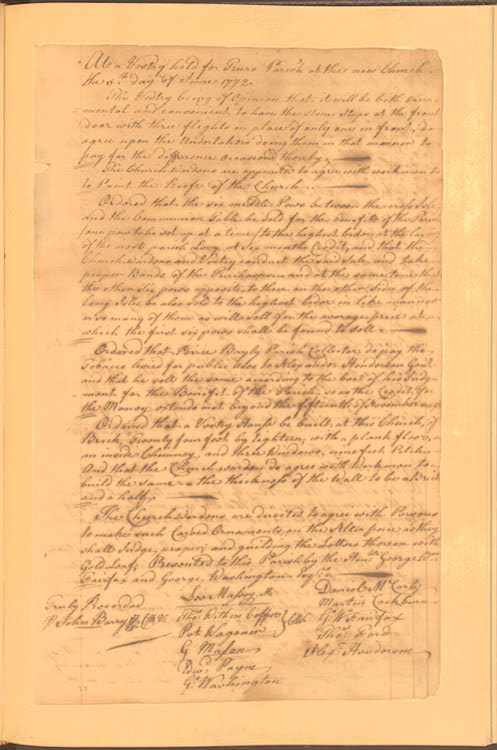 A colonial parish of the Anglican Church in northern Virginia. It was created in 1732 when Hamilton Parish was divided along the Occoquan River and Bull Run. Truro Parish initially covered all of the land north of those rivers up to the Potomac, and westward all the way to the Blue Ridge Mountains at Ashby's Gap. The parish originally contained three churches: Occoquan (the parish seat), William Gunnell's, and a chapel "above Goose Creek". The exact locations of the second two are unknown, but the Occoquan church was later known as Pohick Church, which still stands. In 1733, work was started on a new church "near Michael Reagan's"; this became the present-day Falls Church.

On June 11, 1749, the parish was divided in two, with the newly-formed Cameron Parish constituting the portion north and west of Difficult Run and Popes Head Run. George Mason, author of the Virginia Articles that presaged the Bill of Rights, was elected to the parish vestry that year.

In 1753, the first church service at the new town of Alexandria was recorded.

George Washington was appointed to the vestry on October 25, 1762. His father, Augustine Washington, had served on the vestry for a few years, starting in 1735.

Truro Parish was further split on February 1, 1765. The new boundary was just south of Washington's estate, and the northern portion became Fairfax Parish, with The Falls Church as its seat. Parishoners of Truro, however, complained that the division was far more favorable to Fairfax Parish, and succeeded in having a new border drawn through Washington's estate.
Later churches included Payne's Church on Ox Road (1766), and replacements for The Falls Church (started in 1763, while it was still part of Truro Parish) and Pohick Church in 1767.
Posted by Unknown at 9:23 PM