Reflections on a Letter from the Bishop 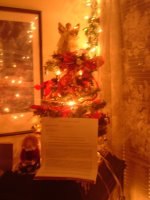 I've been away all weekend at the farm so only opened my mail tonight. I knew this particular letter was coming, I've all ready read it and contemplated it and have worked through all sorts of feelings about it (one thing this letter did was unify, which I don't believe was its intent). But it still didn't really prepare me to come home, find the envelope in the mailbox, open it and find a three page form letter on Diocesan letterhead personally addressed to me from the Episcopal Bishop of Virginia.

Well, sort of addressed personally to me.

I think what said it all - that it was almost unnecessary to read the rest of the letter - was the way in which this one was "personally" addressed to me. The salutation was done in a way that Bishop Lee has never, ever addressed me. I've known him for over twenty years. He received me into the Episcopal Church. I served on the staff of one Episcopal church for nearly seven years and another one for another year after that. I've gone to conferences and meetings and thirteen Diocesan Councils. I've served as an officer in a Diocesan Region for several years and then President of that Region for two full terms after that. I've been a Delegate to Council. I've gone to receptions he hosted at two of the five General Conventions I've attended. I've served two complete (well, I guess we'll see if it'll be complete) terms on a parish Vestry. I've attended confirmations and funerals where he presided as well as an entire weekend retreat with my parish where he was the featured speaker. I've had dinner with him. I've even been a candidate for Deputy to General Convention for the Diocese of Virginia. And in all those settings, he has always called me by my first name. Mary.

You know, I think that just about says it all. The rest of the letter cites fifteen different canons and threatens me with all of them. I keep searching through the letter, but there's no mention of any piece of Scripture, no, not one. And Jesus is mentioned once - in the first line and then He's gone. The letter might as well have greeted me in the name of Zeus for all the good it did. The rest of the letter is written by someone I don't even know. It's as though Pod People (or is that PB People?) have taken over his body and the man I have known for my entire Episcopal life is no more.

Well, I put the letter under the tree - didn't know what else to do with it. I just hope Santa doesn't think it's for him.

So Lee has actually taken to threatening individuals? That is vile beyond belief. You must be on the vestry. It tells where all of this inclusiveness and tolerance resides -- certainly not among its greatest proponents.

Now what do you do?

That's got to be nasty, really nasty. Do you guys have a defence fund, to preotect individual vestry members?

I guess you feel like Donald Sutherland approaching Karen Allen, don't you?

Sorry -- that should have been the reverse (Allen approaching Sutherland).

Progress of sorts. In the Goode Olde Days, there would already be armies in the field.

You have hate mail!

I do empathise with you BB. I think there must be a class in Seminary about how to write hate mail. I've never seen more unprofessional or venom than from the clergy. Always opening with kises then just the right amount of hate. A least the Bishop chose a distant signature not "Blessings!; Your brother in Christ."

After reading the Post article this morning, and as an onlooker, my response was a pox on both your houses. Bishop Lee's letters were so out of line. And to write to BB as Ms. Ailes instead of Mary speaks volumes to me. Instead of recognizing that members of his community are in pain he hides behind legalisms and propety rights. Why can't he offer some compassion or are we in a society that has lost all compassion? Because after reading the statements by the spokesperson for Touro and Falls Church I am appalled at his excusing Peter Akinola's support for a law jailing homosexuals. And excusing it becuase of the political situation in Nigeria is a joke! I would suggest a visit to the Holocaust Museum to those of you who are not outraged at the jailing of homosexuals. Perhaps the Nazi's treatment of them will give you pause for thought.

I just hope that at this time of year we can find it in all our hearts to be compassionate, especially to those we disagree wtih on issues, big or small. And I hope we can also remember that we are all children of God.

The Post got it wrong. This is like saying that Bishop Lee endorses jailing homosexuals in Virginia because he's never spoken out against the Virginia sodomy law (which is still on the books, by the way). Those mean-spirited remarks about Peter Akinola came from the Bishop of Washington who sought to use the politics of personal destruction against an Archbishop in the Anglican Communion. That grieves me more than I can say.

Old issues never die, they just get recycled in the Washington Post. At this point, we know two things about this reporter.

1) He writes with an adgena
2) He never investigated therebutal to the last error.


I do not think Jim Pierobon is fully up on the old issues. He was not the joint spokesman back in Feb.

Here's the Truro rebutal (also an All Saints Chevy Chase one -- more impressive, for that's Rev. Al Zadig challenging the charge of his own bishop (+Chane)).

I would suggest visiting the Holocaust Museum for propaganda of the Nazies.

My dad was a journalist for many years, pox on the Post for SLOPPY reporting and poor research. The editor really should have sent this story back to the reporter for such blatant biasis.

I truly hope neither Michelle Boorstein or the editor were Medill grads, that would be depressing if things have sunk so low.

1) He writes with an adgena
2) He never investigated therebutal to the last error.

Opps, I also need to check facts and correct stories, Michelle is a "she."

My point was, and I will take back my response to the spokesperson in hopes that he really was not up on the facts (and the Post should be chastized for not checking their facts), that there seems to be a real lack of compassion these days. And Bishop Lee is leading the way on that one. He does not see the humanity of the other side. He doesn't see their pain and he just keeps causing more of it. Some how real issues are being hidden behind legalism and property issues.

More on how she should get her facts straight. What glowing error is contained in the first sentence of the Washington Post piece?


(Now I'm embarrassed I didn't catch it, but the guy's a lawyer, so I guess he'd look for discrepancy like that).