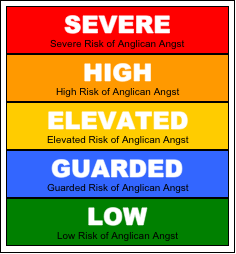 Well this is lovely. Five days away from the Investiture and this is how it all begins.

BB UPDATE: From StandFirm comes this posting from the Bishop of Ft. Worth (see below, before Living Church article). It looks like the "letter was in the mail" before the current PB and the PB-Elect left for Lambeth. Wonder how Rowan Williams feels about this? Threatening letters from a PB's chancellor to two Ordinaries? Who gave Beers such disasterous advice as to send letters like this five days before the new TEC-PB has her moment in the sun? And what do we think the national media is going to ask her - that she went after the two bishops who do not ordain women? Schofield has all ready been pushed towards the presentment cliff by four TEC liberal bishops and saved from tumbling over the cliff by cooler heads. But who in their right mind would send letters like this before what is supposed to be a "Happy Church Photo Op" at the National Cathedral?

LATER: Looks like the progressive blogs are celebrating. I hope those same progressives understand that TEC is suppose to be a member of The Anglican Communion. The action of these letters sent by the chancellor of The Episcopal Church with the apparent authority of the Presiding-Bishop-elect do not bode well for her to be received joyfully in February. How could The Episcopal Church authorities do something so insipidly stupid just days before all the hoopla hits Washington?

What an outrageous act by the Chancellor - is he trying to provoke a firestorm? Or is he a grieving Detroit fan? Or did he just lose it because the Yankees weren't in the World Series? And what is with picking out the bishops who don't ordain women? And then threatening that the punishment is coming from the new woman Presiding Bishop? What's up with that?

We here at BabyBlueOnline affirm the ordination of women to all orders of the church - but this kind of threat - have they lost their minds? Why would anyone want to cause such a firestorm just days before the service at the National Cathedral? Are they trying to get the orthodox to react like outraged Blue Meanies so that the progressives can point fingers and say "Told you so! Told you so! Blue Meanies! They're all Blue Meanies - and their little dog too!"

Or are they playing out that old Klingon Proverb:
Revenge is a dish best served cold?

------
The Beers letter is dated Oct. 19th and came by regular mail to my chancellor’s law office. When a copy was faxed to me from his office on the 27th, I then faxed it to Lambeth Palace, so the Archbishop would know what was in the works. Alas, Katharine had been there for her visit with the ABC that very day but had already departed.

On the eve of Nevada Bishop Katharine Jefferts Schori’s investiture as the 26th Presiding Bishop of The Episcopal Church, her chancellor, David Booth Beers, has written identical letters to the chancellors of two traditionalist dioceses demanding that they change language “that can be read as cutting against an ‘unqualified accession’ to the Constitution and Canons of the General Convention of The Episcopal Church.

“The timing of this letter is shocking,” Fort Worth Bishop Jack L. Iker told The Living Church. “Some of the changes he refers to go back as far as 1989. All this was done completely out in the open and news of it was distributed widely. We have kept the Presiding Bishop informed at every step.

“We are still contemplating our response, but I think we will refuse to take the ‘bait’ by responding in kind,” Bishop Iker said. “We will probably refer him to our website where our constitution and canons are published.”

In recent years, four dioceses – Fort Worth (Texas), Pittsburgh, Quincy (Ill.) and San Joaquin (Calif.) – have amended their constitutions to qualify the diocese’s accession to General Convention, reserving the right of the diocese to reject bylaws which in their view contradict scripture and/or historic church teachings. Spokespersons for Pittsburgh and San Joaquin reported being unaware of receiving a similar letter. Fort Worth, Quincy and San Joaquin are the only three dioceses in The Episcopal Church which do not ordain women.

Mr. Beers concludes his letter stating “should your diocese decline to take that step, the Presiding Bishop will have to consider what sort of action she must take in order to bring your diocese into compliance.”

Bishop Iker questioned whether this was possible given that in September, Bishop Jefferts Schori told him to his face at a special meeting in New York City called by the Archbishop of Canterbury that the Presiding Bishop has no jurisdiction or oversight of dioceses under Episcopal Church polity. Also during September, a disciplinary review board rejected holding San Joaquin Bishop John-David Schofield guilty of abandoning the communion of this church for similar changes made to its constitution by convention in that diocese.