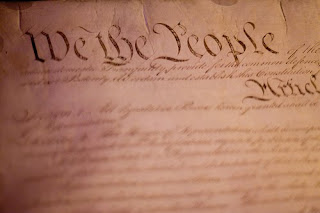 The cruelest month gets off to an entertaining start, as the Supreme Court of Virginia releases its April argument docket. From April 12-16, the Court is set to hear six criminal cases, one VSB disciplinary board case, and 21 civil cases.

Of particular note, the Court will hear a pair of cases about the ownership of church property in Northern Virginia. I gather from the news coverage that the cases involve property held by parishes that left the Episcopal church, and challenge the constitutionality of Virginia's unique "division statute," Code Section 57-9(A). The Diocese of Virginia has put the briefs up on its website, but I've been busy and have not yet had a chance to read them.

How cool are these cases? In one of them, George Somerville--he of standard-of-review fame--Troutman Sanders, and Professor Howard square off against . . . well, roughly everyone else with a law license. Here are the counsel in Protestant Episcopal Church in the Diocese of Virginia v. Truro Church, et al., Record No. 090682:

And if that's not enought, amici abound; there's even a brief co-authored by Ken Starr.

Church and state? One-of-a-kind statutes? Publicly available briefs from a all-start lineup of advocates? It's all almost too good to be true.

Richmond, Richmond....hmmm. The Reverend Chuck Alley from Richmond has been invited to THE REALLY BIG SHOW: the 4th Global South Encounter which promises something substantive, rather than more Indaba Ubuntu (palaver). Sue away TEO. Take all the buildings. Still can't make homosex holy or healthy or make people believe it is.

The sound of meters whirring is deafening.

Very true, but what prestigious meters for the appellees!

Yeah, the appellants are doing pretty well, too. Good lawyers in this case. Let's see how it ends. Hopefully the right result - the Division statute is chopped down and the common law takes over and sends the property back to its rightful owners.

I am not sure if you know this, Anon, but unlike in some states, the Commonwealth of Virginia has not recognized implied trusts. What matters is who's name is on the deeds - and the Bishop of Virginia has his name on some deeds, but not on the deeds in question. When asked in court why the churches were not told to transfer their deeds over to the bishop, his attorneys confessed it would have caused a firestorm in the diocese. Wonder why?

The issue of implied trusts that bb points out has not yet come into play in the courts.

Should TEC/DioVA prevail on issues of the Division Statute,the case can then proceed to determine if the Dennis Canon is an implied trust (which it is). If the CANA churches previal, then the game is over unless TEC wants to go to the SCOTUS. TEC had that opportunity in SC and decided not to go there.