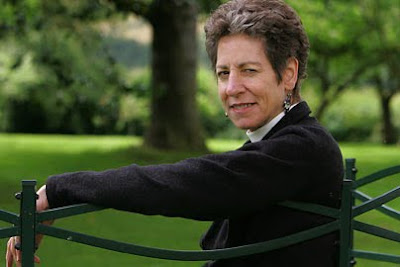 An interesting piece of writing - it doesn't even sound like her. Her audience is the archbishops and presiding bishops of the Anglican Communion. And we wonder why Americans have such an image problem abroad. She takes no personal responsibility for the fact that she has encouraged this development and embraces it and thinks its darn swell. No, she writes as though she's forced to do this by the canons of the church and the hell with the communion. In fact, she doesn't acknowledge the pain these actions have caused - and continue to cause - to Christians around the world. In fact, she spends the entire letter emotionally, even spiritually removed, detached. Interesting. This is certainly not a letter to friends and brothers, no, it most certainly is not. And that says more than words.

My dear brothers in Christ:

I write you because of developments in The Episcopal Church, about which you will soon hear and read. As you all know, the Diocese of Los Angeles elected two suffragan bishops in December, and the consent process for those bishops has been ongoing since then. One of those bishops-elect is a woman in a partnered same-sex relationship.

At this point, she has received consent from a majority of the bishops with jurisdiction, and a majority of the standing committees of this Church. According to our canons, I must now take order for her consecration. I will do so, and anticipate that both bishops-elect will be consecrated at the same service on 15 May. It has been my practice, since I took office, to preside at the consecration of new bishops, and I intend to do so in this case as well.

It may help you to know that our House of Bishops will continue to discuss these issues at our meeting later this month. The papers we discuss will be available publicly following that meeting, and we will endeavor to see that you receive copies. I would encourage you to engage in conversation any bishops whom you know in this Church, particularly those you came to know at Lambeth, whether in Bible study or Indaba groups.

Know that this is not the decision of one person, or a small group of people. It represents the mind of a majority of elected leaders in The Episcopal Church, lay, clergy, and bishops, who have carefully considered the opinions and feelings of other members of the Anglican Communion as well as the decades-long conversations within this Church. It represents a prayerful and thoughtful decision, made in good faith that this Church is ‘working out its salvation in fear and trembling, believing that God is at work in us’ (Philippians 2:12-13).

I ask your prayers for this Church, for the Diocese of Los Angeles, and for the members of the Anglican Communion. This part of the Body of Christ has abundant work to do, and God’s mission needs us all.

If you have questions about this decision or process, I would encourage you to contact me. I would be glad to talk with you.

I pray that your ministry may continue to be a transformative blessing to many. I remain

Your servant in Christ,

Tip of the Tinfoil to SF. And now here's Bob:

"According to our canons, I must now take order for her consecration"

Where did you cite the letter from? I think Episcopal Cafe has a shorter version than the one posted at the Diocese of East Tennessee site ... Yours is the shorter version!

i enjoyed how she played the victim in all of this. she has to follow church canons...she has no other choice but to approve of this election. what a martyr...

A highly unusual letter from Schori as it mentions Christ and quotes from Paul.

Somewhat off-topic, but there is an article in a local Northern Virginia paper about the ongoing litigation here. The article is interesting because it quotes the senior warden of one of the "continuing" Episcopal congregations who, with refreshing honesty, admits the existence of the elephant in the room, which is that TEC does not have sufficient congregants to sustain the ADV buildings should those properties be seized through litigation:


The Church of the Epiphany-Episcopal, in Oak Hill, was formed that year by some of these estranged parishioners after months of searching -- both geographically and within their own souls -- for a new place to worship after the majority of their former parishioners and their church became Anglican.

Today, the small Episcopalian congregation of about 25 continues to meet on Sundays in Oak Hill Elementary School.

"I'm not sure exactly what we would do if the current ruling were overturned in Supreme Court," Senior Warden Scott Meyer said. "If it were possible, we would like to move back into our old church building, but it is unlikely that we could now afford it.

Meyer added the church is planning to discuss the issue with the Episcopal Diocese and is giving the matter "serious thought."

Strike up the band, it's time for a song:

I don't care how much money I got to spend
My lawyers are back in court again
Oh the olden days are gone
I'll be moving on
My bishop, she wrote me a letter

Well, she wrote me a letter
Said she couldn’t mess with canons no more
Listen to me can’t you see I got to bow down
To my bishop once more anyway …

Well done, Londoner - pee off almost everyone. What has the word done to offend Americans? The same, I suppose, that "wrath" has done to offend the Brits, who won't pronounce it correctly.

It's called establishing a precedent. KJS couldn't care less what the rest of the Anglican Communion thinks or feels about this UNLESS that thinking and feeling leads to concrete action. What KJS is doing here is simply moving ahead with the political strategy long advocated by TEC's extremist left wing - that is openly and honestly push the sexuality agenda "in your face" to the rest of the Communion, and dare them to respond. If they do respond, then fine, TEC would rather go it alone. If they don't respond (and TEC doesn't think they will), then you've set the precedent that TEC can move forward full steam ahead without consequence.

It might not be catholic, Anglican nor Christian, but as a political strategy I would have to say it is a good one for their cause.

I agree James - this is activist politics or what is often called "community organizing." The "voice" of this letter does not sound like Schori, but by a PR firm hired to promote the TEC "community organizing." It is very well done - and to respond to such a letter is to be placed in the position of "going negative." It is well done,and if this is the intention of TEC now to become a political organization then this is how it's done.

"When congregations were split in 2007, many conservative Episcopal parishioners converted to Anglicanism..."

Once again I'm reminded why it is dangerous to believe anything presented as fact by the press.

"The 'voice' of this letter does not sound like Schori, but by a PR firm hired to promote the TEC 'community organizing.'"

If someone else wrote the letter, that would explain how the references to Christ got in.

"Know that this is not the decision of one person, or a small group of people. It represents the mind of a majority of elected leaders in The Episcopal Church, lay, clergy, and bishops"

Translation - We have decided to walk apart.

This is not really news, is it? The question is whether the communion will say "Well then, okay, Good luck" or whether they will come up with some new process to draw this out another year or two.

I am thankful for clarity. I just hope we are as clear in our response.

Two weeks ago I went to the parish of my youth for a baptism ... it was so sad!

Services were now the 8AM old guard and a 10AM one (used to be 3), no teenage acolytes (at peak we have five positions all filled with teenagers, then add on lay readers and LEMs), the choir was four (shoot any average worship team is four, but when I left in the 90's there were over 30), the ASA that week was about the same as a one-year-old plant two miles away. I did not receive the element, rather crossed my arms for a blessing, remembering that this bishop was going to court in a few weeks against my friends, even though I am not a part, fellowship is broken ...

This letter is just plain sad ...

What happen to the parish of my youth is sad ...

This whole mess is just so sad ...


This is what happens when we rebel against what the LORD has written and try to make the Divine Word say what we want and declare sin righteousness and condemn the faithful ...

It's hard to watch the denomination of my youth's self-destruction !

Lapin - perhaps you need TO take your pills, TO chill out?

I am so sorry for you. But probably it was happening for years and you just didn't notice. What you see now are only the fruits of seeds that were sown probably 20-25 years ago.

We tend to become attached to buildings and venues. Try to remind yourself that the Church is the Body of Christ - the people, not the venue. Where did the PEOPLE go? Are they still, somewhere, the Body of Christ? Then all is well for them. Rejoice and be glad that those who "rebel against what the LORD has written and try to make the Divine Word say what we want and declare sin righteousness and condemn the faithful" are so few in number!

Lapinbizarre said...
This comment has been removed by the author.
12:03 PM

Who's not chilled out, Londoner? Not I. You're the one playing "Snotty Brit" about a standard US linguistic practice.

Grammar issues aside - ain't it great to see Katie so honest....imagine if we had Griswold spinning all this stuff and playing for time. I like Katie's honesty.....especially as she knows she has been to her last AC Primates' meeting as a result of this letter.

You have to remember that Britain and America are two nations divided by a common language.

Whereas "I call you", to take a single instance, does make sense, Londoner? There again, I'm not the one playing "Snotty Brit". Or am I?

Indeed, Mr Weir! But united in so many other ways....including through links between Anglicans (and I include ACNA people in that, of course)