The Richmond Dispatch: Defending the Faith and Church Property 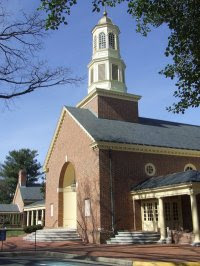 An editorial from David Bena this morning, from the Richmond Dispatch:

It's certainly unfortunate that we've come to another round of church versus church, as the Virginia Supreme Court tomorrow will hear the appeal in the church property suit brought by The Episcopal Church (TEC) and Diocese of Virginia against nine faithful Anglican churches in Virginia.

Although we expected the appeal, it is unfortunate that this dispute has continued, and, for that matter, started in the first place.

Several years ago, our orthodox churches made a decision to remain faithful to the teachings of the Bible and the worldwide Anglican Communion after it became clear that TEC was on a wayward path. How did we come to that costly conclusion? TEC formally rejected the authority of Scripture. In its formal response to the Anglican Communion's call to return to the authority of Scripture, TEC said, "We cannot accept what would be injurious to this Church and could well lead to its permanent division."

The painful irony is that TEC's decision to reject the authority of God's Word has been gravely injurious, and has itself caused the very division that TEC's leaders claimed they sought to avoid. Once someone rejects Scripture, then they reject Jesus Christ and Christianity as a whole. It's as simple as that. We could not follow a national body that rejected the very Word of God.

Our Anglican churches (under the umbrella of the Anglican District of Virginia) attempted to resolve matters with the diocese and TEC graciously and out of court, following a process that we spent almost a year developing with diocesan representatives. But the diocese and TEC abruptly broke off discussion of settlement and instead launched a legal confrontation. They sued not only our churches, but also almost 200 individual clergy and volunteer board members.

We opted to defend our churches because they are a great resource for doing the work of the Lord. We have seen TEC take over other church buildings from disaffiliating congregations, claiming that it was doing so to preserve some sort of "Episcopal legacy," only to then turn around and sell those buildings to non-Christian entities. In one recent case, the Episcopal Diocese of Central New York even sold a church building to an Islam awareness group rather than to the disaffiliating congregation that had offered to pay approximately three times as much to buy the property. Similarly, TEC Presiding Bishop Katharine Jefferts Schori even admitted that she wouldn't have any objection to church property being sold for secular purposes. No doubt that was shocking to us.

Just last year, the Fairfax County Circuit Court ruled in favor of the orthodox churches by affirming our position that we could disaffiliate from TEC and keep our church property. In a series of landmark rulings during a thorough legal process extending over two years, the court acknowledged that there was indeed a division within TEC, the diocese, and the larger Anglican Communion; affirmed that we could invoke the Virginia Division Statute (Virginia Code 57-9) in our defense; ruled that the Virginia Division Statute was indeed constitutional; and concluded that the votes taken by our congregations were conclusive as to the title to and control of the property covered by our petitions under the Division Statute.

For our churches this issue is simple. We exercised our religious freedom by choosing to stay true to the Gospel, following long-established Virginia law in doing so. To resolve the property issues, there is no need for the Virginia Supreme Court to wade into issues relating to theology or doctrine. In fact, the U.S. Supreme Court has said that states can resolve church property disputes based on "neutral principles" of law, such as majority rule -- which is exactly what the Division Statute does.

The Division Statute wouldn't even come into play if the diocese or TEC held the titles to these properties. But in this case, the properties were built, maintained, and cared for over the years by the local congregations -- congregations that have been willing to take a bold stand for the truth of the Gospel in the face of intimidation and legal threats.

Going into tomorrow's appeal hearing, we continue to be confident in our legal position and in the more than 200 pages of well-reasoned rulings of the Fairfax County Circuit Court. And while we remain fully prepared to continue to defend ourselves, we are ready to put this litigation behind us so that we can focus our time, money, and effort on the work of the Gospel. Our doors have always been and will always be open wide to all who want to worship with us.

Bishop David Bena is the primary contact bishop for the Anglican District of Virginia, and is a suffragan bishop in the Convocation of Anglicans in North America. The Episcopal Church has its opinion as well here. Obviously some denominations are quite worried that the Commonwealth respects the freedom of the people to voice their conscience regarding their own property held in trust and calls it "giving advantage to any congregational majority which can move their differences with their denomination into the realm of a "division" and muster a majority of parishioners to their side." Yes - I think that's called the freedom to vote.

Yep, it's noted above.

The other op-ed piece is from the Rev. Gunn - not an Episcopal clergy, but rather a member of one of the amicus filers.

Here is what the First Amendment actually says:

Congress shall make no law respecting an establishment of religion, or prohibiting the free exercise thereof.

It's a bit of a stretch to link the Rev Gunn's assertion to the actual words of the First Amendment.

Dr. Bena doesn't seem to do any better than anyone else in addressing the basic question of identifying the principle by which someone who leaves a church gets to take it with him. Is it numbers? If so, how many is enough? Is it correct doctrine? If so, who decides? Is it cash paid in? If so, how do those who stay recoup their investment? Or is it simply that the legislature of the Commonwealth of Virginia says you can get away with it?

I guess we'll find out if the latter is the controlling principle. The other options don't stand up very well.

"Or is it simply that the legislature of the Commonwealth of Virginia says you can get away with it?"

That is what is called following the law. And yes, it is generally encouraged in the Commonwealth of Virginia.

Scout - According to the lower court, this is a bonafide division of a church, not a party leaving a church - just "leaving" does not activate the VA 57-9 - John N

A church decides how it divides. Did TEC, consistent with its internal constitution, decide to divide into "branches"? Don't think so.