Podcast from the Anglican Primates Meeting 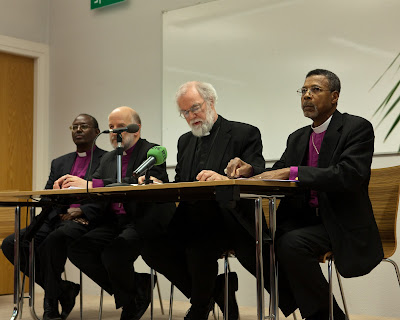 
It seems that Rowan is disappointed, perhaps even angry that the 1/3 of the primates didn't come when from his mind the meeting was rearranged to accommodate them (there is obviously disagreement on that point). But it's not surprising that the first question from the Church Times is focused on the elephant in the room - the major issue facing the primates is whether the Anglican Communion will continue to exist or break up for all intensive purposes. Breaking up the primates into small working groups is not a bad idea and it's helpful to know that they were all aware of those leaders who make up the majority of the Anglican Communion membership were not in the room - but that the illusion that this meeting carried on as business as usual just fosters in the end more drama.

And so while they are meeting in Ireland and writing letters, the Episcopal Church continues to block efforts for peaceful resolution between local ACNA parishes and Episcopal dioceses for an amicable separation as we see in today's statement from the ACNA where Archbishop Duncan tells us that “It is heartbreaking that even if they (St. Philip's Anglican) agree to pay a substantial settlement fee to keep their buildings, members of St. Philip’s are also being forced to separate from their Anglican family as a condition of the property settlement. Freedom of religion is at the heart of this matter and no congregation should have to stipulate that it will separate from its current body as part of a monetary property settlement." This didn't even show up as blip on these primates radar, which comes across as a global slap at the primates that stayed home from the meeting, fostering even more drama, more division.

"They utter mere words;
with empty oaths they make covenants;
so litigation springs up like poisonous weeds
in the furrows of the field. "

in a hundred years, people will read about a Dublin meeting attended by the representatives of very few Anglicans in the world; and about TEC attracting only around 1 in 400 Americans (avg age >50) in classes about why revisionist ideas failed in the AC (main answer - not many people go to hear about 'ubuntu' on a Sunday in the US, Canada, Scotland, Ireland, Mexico, Brazil, NZ (which has 3 Primates for a tiny Sunday attendance?!). In a hundred years, revisionists' impact in the AC will be nothing more than a history class..... we are living through some of the damage they can cause but let's keep that perspective. Dr Williams can have conversations until the cows come home - it really doesn't matter much.... thankfully, most of the AC is free of his fake 'indabas' and other tactics of indecision etc etc