Yes, we are LIVE at the Willow Creek Leadership Summit at the satellite site at Fairfax Community Church.  It's conducted in a very "Boomer Style" with men (so far) in suits at a podium giving motivational speeches while the people sit in chairs in the dark and listen.  Well, there are a few Millennials sitting in the back rows scrunched down in their seats with the glow of their iPhones and laptops illuminating their faces as they text each other about where to go for lunch.

My view in recent years is to read Seven Habits of Highly Successful People and when one gets discouraged, just read it again.  It's a bit cheaper, but not as much fun because we have a big group here from Truro and there are other friends here as well and that's quite fun.  The real learning seems to happen in between sessions when we stand around clutching the coffee from the church Coffee Bar and chat up the talks.

Bill Hybels kicked off the morning with his four C's - Character, Competency, Chemistry, and now Culture.  These are the qualities leaders should look for in building a team, he said.  That seems pretty much good advice.  The question running through my mind is whether this what what Jesus did when he called his disciples?  They did not exactly - as a group or individually - exhume these four qualities in abundance.  Frankly, it wasn't until after the resurrection that we even began to see the those qualities shine through, though it's clear Jesus must have seen something even in the beginning.  But I am not sure in their "initial interview" any of the disciples had an abundance of these characteristics - some by a long shot.  Of course, Jesus did have an advantage - He got to be Jesus.


Another thing Bill Hybels said is that if you want to lead people somewhere, you need them to know how bad it is right where they are right now.  You can't just put out the vision of how wonderful things will be on where you are going, you have to tell them that it's not good where we are right now.  He gave as his illustration the founder of Compassion International taking major donors to a food line in a poverty stricken country where children were waiting for food, only to have the food run out even as they were all still standing in line.  They all watched as the children fainted, turned away in despair, or cried when they could not be fed and Everett Swanson, the founder, turned to his donors pointing and said emphatically that this must not continue, that they must do something to change this. 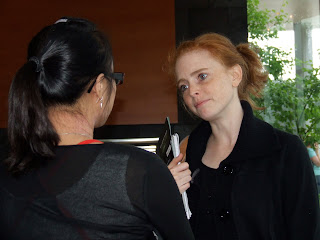 Being comfortable in where we are - even as a brighter future is painted - is a great challenge for individuals and for the church, isn't it?  What would cause people to risk much to make a change?  There must be a deep sense of dissatisfaction and rather than just shrugging one's shoulders ambivalently, to have a vision that change must be made.  Hybels said that long before Martin Luther King, Jr. gave his I Have a Dream speech, he spent years, sacrificial years, spelling out the problem of racism and racial inequality, found most especially in his Letters from Birmingham Jail.  Once people grasped and accepted that things were indeed not good, in fact, they were terrible they were ready to hear the vision, the hope that he spelled out so eloquently at the Lincoln Memorial when he said "I have a dream."

It seems to me the first step for leaders is to come out of denial.  The admit, it's not good where we are.  So many excuses can be made to look away or to paint a happier place then truly exists.  And we wonder why the vision might seem to fall on deaf ears - perhaps because we are not willing to call things as they are.  That does take courage.  It also needs to be correct.

A group is heading to Brion's Grill for lunch - Bryon has been a major supporter of Love the World Fellowship and so we are heading over to show him our support!  There are several leaders from within the Love the World Fellowship community here with us today as well.  It will be interesting to hear what they are hearing in these talks.  After all, they are indeed fantastic people.
Posted by Unknown at 1:16 PM

I am hurt you did not post that picture of me.

Your wish is my command. :)

I'm thrilled to get a glimpse of Andrew. Please post more pictures of him.