And now what does appear to be satire in the current edition of Ebony Magazine (yes, Ebony!) by Eric Easter - at least we think it's satire this time.  The HoB/HoD list is taking it seriously, but over here at the Cafe we think it's a grand spoof - but perhaps hitting closer to the target - too bad they don't mention the Cosmic Mass. 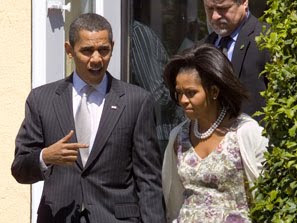 Now that you've become President and an official resident of Washington,D.C., you'll be looking for another place to call your church home. It won't be easy, wherever you go it's going to be tough on the pastor and the congregation. Anything said from the pulpit will be scrutinized, and every utterance the pastor has made on video or in print will be gone through with a fine-tooth comb.

You don't need that kind of hassle. No, my friend, you need to just go a whole other route. No more shouting, no more histrionics, no more politicking from the pulpit.

May I suggest a lovely solution? The Episcopal Church. And no, I don't mean A.M.E. they're still a little loud. I mean the full-on candles, incense, altar boys and stained glass Anglican experience. It's been the default solution for "quietly political" Black folk for nearly two centuries now. The list of powerful and influential Episcopalians is miles long. You won't have to worry about militants,  that just wouldn't be polite. Episcopalians don't agitate, they negotiate.

Here are a few more reasons:

1. Plenty of time for reflection. Unwarranted noises like hand-clapping and "Amen" are pretty much frowned upon. Episcopalians run things during the week; we want a nice nap, not a show. And anyway, if we wanted a show we'd
go see "Jersey Boys."

2. None of that pesky theology stuff. "Christ has died. Christ has risen. Christ will come again. Allelulia." That about sums it up. You can fake the rest.

3. Real wine. Nothing says communion like a tawny port.

4. Catholicism without the guilt. All the pomp and circumstance and none of the confession.

6. Ambiguity. Half the church wants gay priests, the other half doesn't. But people are way too polite to say which side they're on. You'll never have to decide. Perfect!

7. Nobody questions your faith. Most of us Episcopalians are borderline atheists hedging our bets just in case all that God stuff turns out to be true. Who are we to cast stones?

8. Flattery. The congregations are so old, you'll feel wonderful when the Senior Warden asks you to head up the new Youth Fellowship group - even though you're 46.

9. Fast services. 90 minutes -2 hours tops. You can hit the 8am mass and be back in time to pick up croissants, The New York Times and watch Meet the Press. Or better, get in 9 holes, hit the 10:30 service and still have friends over for brunch.

11. History. 26.2% of all former presidents have been Episcopalian, despite only being 15% of the population. That's great company.

12. No fancy preachers. Father David wants to get paid how much? Fire him!

13. Only four required days of attendance. Show up more if you want, but remember these dates: Palm Sunday. Easter, Christmas Eve, Golf Outing. Other than that, send a check and you're good.

The Episcopal Church welcomes you.

Rather interesting that this satire is coming from Ebony Magazine.  Read it all here.
Posted by Unknown at 10:32 AM

Selecting a church is a difficult decision for the President. That why he's more confortable in a mosque.

Another reason, Pledges don't really have to be kept, someone else will bail the church out.

That is because he's more comfortable in a mosque.

whitestone can see into the President's soul?

silly, political comments aside, I hope Pres O does not go to somewhere false teachers tell people what their itching ears want to hear...

That was great. It's funny, because it's true.

Priceless! Some of the best satire I've seen all week.

More comfortable in a mosque? Hardly something I would think of saving about an adult convert to the Christian faith.

obama needs to find a church that can mimic his radical pro-abortion ideologies...how about ecusa?.
two peas in a pod.

I don't claim to know, or judge, where Obama stands in regards to his faith. I do question his hardline stance on abortion and am curious how that ties in with his "christianity". How someone can be so "pro-abortion" in their politics yet claim to believe in a God who is sovereign is beyond me. Abortion is NOT a political issue. It is a life issue...and if you believe in the God of the Bible...then you have to believe that God is sovereign. If you believe that God is sovereign than you must believe that God wouldn't allow pregnancy (regardless of the situation) and not have it in Your plan. So for a christian to deny the rights of the unborn is, imo, to deny God's sovereignty. In denying that you gut the very character of the God of the Bible. I don't buy it...and i'm sure Fr. Weir will come here and post how abortion is a "difficult" issue and how one can never know clearly what the Bible teaches about the unborn. It's the same rhetoric that TEC has been spewing for decades, and with people like Ragsdale as their muse, they continue to push the pro-abortion stance further and further. So Obama, tec, whoever can continue to claim "christian" as their title, but their views on abortion are a cause for concern.

I decline that bait and will not spew.

You decline? It's not a conversation to bait you into anything...but, I have read many TEC Priests and Bishops say those very things in regards to abortion. You pastor in a denomination that is radically Pro-abortion. TEC supports groups like the Religious Coalition for Reproductive Choice, and NARAL (to name a few). You have the head of one of your divinity schools preaching that abortions are "blessings". And yes, I read the entire "sermon" (wanting to throw-up the entire time mind you). How do you, a Priest, manage to justify your denomination of choices' stance on abortion?
It isn't a baiting question...just looking for someone from TEC to give an honestvanswer on why they, as a denomination, support UNFETTERED ABORTION RIGHTS?
or does TEC, as a whole, need to "listen" and discern" more in regards to the "holy spirit" leading TEC to bless partial birth abortions?

BTW, Katherine's speech that you cite was not a sermon.

The Episcopal Church has many members who are "pro-life" and some have been active in NOEL.

I will make two comments. First, that there are circumstances in which I believe abortion is permissible, perhaps even mandatory. When the best medical advice is that both mother an child will die if the pregnancy goes to full-term, I think abortion is a moral choice. Yes, doctors are not infallible, and there is some chance that they could be wrong, but I think their skills and knowledge are a gift from God. Second, we live in a country where there is very divided opinion about the morality of abortion. Unless and until there is something approaching consensus, efforts to make abortion illegal will fail and the energy spent on them might better be spent on providing better alternatives to abortion.