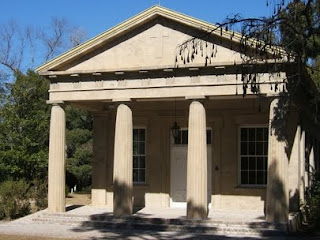 As has now finally happened after a decade of litigation at All Saints Pawleys Island in South Carolina, this is what the Virginia Churches who voted to separate in late 2006 hoped to do as well before 815 intervened after Bishop Lee formed his Property Committee to negotiate a similar settlement and forced the Virginia Protocol to be abandoned in favor of massive litigation. From here:

After nearly a decade of legal and personal conflict, the issue of the All Saints Church property has been resolved, thanks be to God. Our Vestry and that of the Episcopal congregation have come to an understanding that ends the case forever and also provides a way for both churches to go forward into the future in faith and service to Christ.

As a result of our agreement, both sides recognize and accept the September 18, 2009, decision of the Supreme Court of South Carolina in which the Court determined that we are the rightful owners of the property and legitimate Vestry for All Saints Parish, Waccamaw. The Episcopal congregation has taken action to withdraw their Petition before the Supreme Court of the United States. As you may recall, the South Carolina decision was truly remarkable in that it clearly refuted any claim that the Episcopal Church might make on our property through the use of the so-called Dennis Canon.

In a desire to bless the work of God in the Episcopal congregation, our Vestry has made the offer of a financial gift of $375,000 to them to assist in their future ministry in our community. In addition, we have offered several items that represent their participation in the heritage of All Saints Church. We also have communicated that those members of their congregation who have historic ties to All Saints will be given the opportunity to use the appropriate buildings in the event of funerals, weddings and other pastoral occasions in accordance with the same guidelines and policies that are followed by our own members.

Read it all here. Prayers for the Episcopal Diocese of South Carolina as they meet in convention.

It amazes me that despite all the legal pushes by TEC, that these issues can be resolved between two parties. I am of the opinion that if TEC actually cared about the Spiritual health and well-being of ALL Christians, it would stop the legal hatchet-schemes and allow people to work things out in a peaceful, Christ-like manner. I do not believe that TEC, or anyone in 815 care about the actual people involved in these cases, although they pay lip-service to their defense of the "remaining TEC faithful"...regardless of there being 1 or 1000. They merely want to devour the property and reap the monetary benefits. I just wish that someone from TEC had the fortitude (read: guts) to actually admit that all they want is the property, and that they no longer care about a church actually living out the Great Commission. I doubt that will ever happen...and we'll continue to see lawsuit after lawsuit pile up against layity, Priests, Bishops and members of the vestry...the ends justify whatever means possible for these people...and in the "end" they will be held accountable for their actions.

Glory be to God for what has happened in SC.
-Josh

".....it would stop the legal hatchet-schemes ...." The Pawleys Island litigation was initiated by the breakaway congregation, Josh.

Here in Virginia, it looks like the state supreme court has scheduled oral argument for April 13. Prayers ascending that our buildings will stay with the Christians than sold to the Muslims like what happened in Binghamton.

I know that they initiated it. My comment was directed at TEC as a whole. Regardless, the end result was worked out.
-Josh

To Steven - The court date has been set? Where did you find that? I've been looking and haven't seen it anywhere. Thanks!

@ Anonymous>Baby Blue posted it sometime back. Wednesday, March 3rd to be exact.

Anam cara, the releases included in the post to which you link refer to April 12-16. I suspect the previous Anon was asking Steven to explain his assertion that it's been set for April 13 in particular.

Got it from an email from TFC. Actually, I read the email a bit too fast as we have been informed the Court is likely to hear the appeal (which I assume to mean hold oral argument) on April 13 or later in the week. While not quite as exact, the likeliest date for argument will be April 13. I may play hooky that day and go down to Richmond.

Lapinbizarre-- I suppose that if we grant the language of "breakaway congregation," you will also grant the language of TEC becoming a "breakaway denomination"? There is long wisdom in the image of glass houses and throwing stones. And of course the deeper gladness here is that the people of God on both sides of the ecclesiastical divide made the decision, Scripturally-shaped as it was, to submit themselves to each other, making peace. Blessed are they.

BB,
Thanks for posting the video, it brought back memories of having seen Supertramp live in Wisconsin back in '79. Happy belated-Birthday!