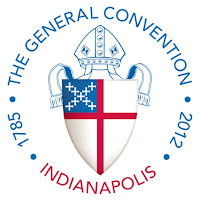 Next week Episcopalians will be gathering in Indianapolis, IN for the 77th General Convention of the Episcopal Church. Meeting July 5-12, they will be facing a challenging agenda that includes authorizing liturgies for same-gender "lifelong covenants" as well as a likely rejection of the Anglican Covenant proposed by the Archbishop of Canterbury Rowan Williams.
The proposed liturgy for the same-gender lifelong covenants called "The Witnessing and Blessing of a Lifelong Covenant," will be used on a trial basis in dioceses until the next General Convention if it is affirmed in Indianapolis.
Bishops and Deputies of The Episcopal Church General Convention are also facing a divided church over the final authorization of a national budget, where in an unprecedented step earlier this year, both the Presiding Bishop and the House of Deputies President presented two competing budgets to the Executive Council, the interim body assigned the task of oversight for the church between General Conventions.
Other agenda items of note will be the election of a newHouse of Deputies President to replace Bonnie Anderson who recently announced that she would not seek another term. A new Vice President will also be elected.
Elected at the 2006 General Convention in Columbus, OH,Presiding Bishop Katharine Jefferts Schori will not complete her term until the next General Convention in 2015. A Search Committee for the next Presiding Bishop will be appointed at the Indianapolis Convention.
Read it all here.
Posted by Unknown at 6:40 PM

"The proposed liturgy for the same-gender lifelong covenants called 'The Witnessing and Blessing of a Lifelong Covenant'" Is there a definition of this phrase? Is this a placeholder name until the word "Marriage is inserted?

This is the first I'd heard about the PB not completing her term... has she listed any particular reasons for that?

It is Bonnie Anderson, the House of Deputies president. It was unexpected but I believe she has only publicly stated the well-known DC response, "to spend more time with her family."

The Rev'd Gay Jennings, who just finished her six-year term on the Executive Board, seems to be her heir-apparent.

I misunderstood this statement, then:

You meant that Schori will not complete *Anderson's* term, then?

So if a party to said "lifelong covenant" decides the grass is greener elsewhere, is he or she obligated to euthanize the "partner"? Or are they setting up for a Henry VIII of gay divorcees?

abram, the phrase you quote is poorly written. The writer is trying to say that the Presiding Bishop's 9 year term will not end (be completed) UNTIL 2015.

Bonnie Anderson on the other hand, has just finished her 3 year term as HoD president, but will not run for relection although she is eligible to and many HoD Presidents have served multiple tenures. If I recall correctly, her predecessor George Werner served something like 12 years? I could be wrong though.

I will try to be clearer next time.