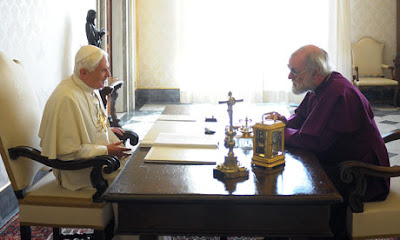 The archbishop of Canterbury, Dr Rowan Williams, took the highly unusual step yesterday of protesting personally to the pope about his shock announcement last month of special arrangements for the mass conversion to Catholicism of disillusioned, traditionalist Anglicans.

A spokeswoman for Lambeth Palace said after their meeting: "Obviously the archbishop expressed concern at the [decree announcing the special arrangements] and the way it happened. The pope listened in a friendly spirit."

A statement issued by the Vatican described their discussions as "cordial" and, without referring specifically to the pope's initiative, said they had "focused on recent events affecting relations between the Catholic church and the Anglican communion".

But the Church of England's version would indicate that this was the most strained encounter between a pontiff and primate since the two churches initiated direct, high-level contacts in the 1960s.

Their meeting was brief – only 20 minutes. And, in a break with custom, no arrangements were made for a restricted group of correspondents to witness the opening and closing phases of the talks.

A 10-line statement issued afterwards was not, as had been expected, a joint one. Vatican sources were keen to play down the significance of the archbishop's visit. They stressed he had been invited not by the pope but by a Vatican university. One described it as "a private meeting, only slightly more formal than a courtesy visit".

Nevertheless, the statement included an important endorsement of continued talks on unity. It said the primate and Pope Benedict had reiterated their "shared will to continue and to consolidate the ecumenical relationship between Catholics and Anglicans". And it noted that the commission entrusted with preparing a third round of talks between the two churches was due to meet soon.

In an interview with Vatican Radio afterwards, Williams said: "I wanted to express some of the concerns about the way in which the announcement of the [decree] had been handled and received, because clearly many Anglicans, myself included, felt that it put us in an awkward position for a time – not the content so much as some of the messages that were given out. So I needed to share with the pope some of those concerns, and I think those were expressed and heard in a very friendly spirit."

He added that he did not believe there had been a "dawn raid" on the Anglican communion and implied that his concern had been with the Vatican's apparent lack of consultation.

Benedict gave his guest a present that will stir comment among Anglicans, and perhaps raise some hackles. The primate was handed what a Vatican source said was a "very beautiful bishop's cross". A sign of fraternal respect – or something more loaded? That and other questions remained unanswered at the end of a visit that a source close to the arrangements said was fixed by Lambeth Palace six weeks ago, at about the time the archbishop learnt of the pope's initiative.

The biggest unanswered question is how exactly Catholics and Anglicans propose to move towards unity after years of progressive mutual alienation. While the leadership of the Anglican church has embraced women's ordination and, in the US, gay priests, the Vatican under Benedict has become increasingly proud of its conservatism on these and other issues.

Read it all here. Here's more:

libhom said...
This comment has been removed by a blog administrator.
3:55 AM

libhorn your comment shames you, this blog, and whatever pathetic fraud of a 'church' you sit in and take instruction from.

I will not give my attention to Rowan Williams who has spent his life trying to defend spiritually, physically and emotionally harmful behaviors and feelings and desires that violate God's Word and moral law, that God has called sin. Williams has proposed compromises of the faith with syncretism, with pagan barbaric laws, instead of defending and preaching the Holy Christian Gospel and Faith, and the Holy Icons entrusted to the Church: Truth, Love and Life as Scripture defines them.


He is a purveyor of false and pagan religions, of the works and words of the world system, the fallen flesh and devil and his counterfeits of love, truth and life: carnality, deception and death.

He has been subtle, deceptive, intentional and skillful in his actions.

He has no excuse of defense. Romans 1:32

The pope's father lost his career for anti-nazi opinion. The young Josef incurred some risk by not participating in the Hitler Youth, into which he had been involuntarily enrolled. Conscripted into the army, he did as little as possibly, nothing in combat, and deserted as soon as possible.

To speak of the pope as a "Nazi" is a violation of the 9th commandment.

Sorry, libhom, but Hagrid woke up and tossed you out the door.

What does the part about the gift of the bishop's design cross mean? I don't understand.

Is there a higher level of cross design for archbishops, making it a snub?

Or is it an invitation/sign that he would welcome ++Rowan to become a Roman Catholic bishop?

Careful, Rowan, that cross may be bugged!

Perpetuia, I agree. What kind of sinister motive is The Guardian trying to read into a simple gift of a cross?