From the London Times: 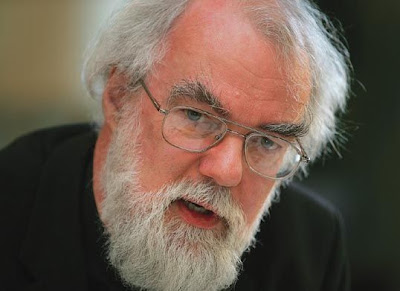 The future of the Anglican Communion looks “more than usually chaotic and uncertain”, the Archbishop of Canterbury, Dr Rowan Williams, has admitted.

In what amounted to a plea to the Church of England’s Anglo-Catholics to resist the temptation to convert to Roman Catholicism over the issue of women bishops, he said: “God knows what the future holds for any of us . . .” He insisted, however, that it remained possible to be at once holy, Catholic and Anglican.

Dr Williams did not refer directly to the Pope’s response to requests from some Church of England bishops and traditional Anglicans around the world for a means of admission to the Catholic Church. He said that it was still possible “to lead lives of Catholic holiness even in the Communion of the See of Canterbury”.

The Catholic Church’s Holy See published the Apostolic Constitution or Papal decree this week, setting out the norms for the new Anglican Ordinariate, which will allow Anglo-Catholics to become Roman Catholics while still retaining their liturgies and other aspects of their Anglican heritage.

The new ordinariate is likely to be named after Cardinal John Henry Newman, the Catholic convert from Anglicanism who is to be beatified next year when the Pope visits Britain.

Dozens of members of the traditionalist group Forward in Faith could opt to move to the ordinariate if the Church of England General Synod proceeds with the consecration of women bishops without making some kind of statutory provision.

Dr Williams was preaching on All Saints’ Day at All Saints, Central London, at a service to mark the 150th anniversary of the church’s consecration. All Saints is a prominent centre of Catholic Anglican worship in Britain. In the sermon, published yesterday on his website, Dr Williams, whose own background is from the Church of England’s catholic wing, paid tribute to the Catholics and Anglicans who went to see the relics of St Thérèse of Lisieux during their recent tour of Britain.

He added: “God knows what the future holds for any of us, for any of our ecclesiastical institutions, but we can at least begin with what we can be sure of — that God has graced us with the lives of saints, that God has been credible in this fellowship with these people.”

He added: “This church with its very particular place in the history of the Church of England is one small but significant facet of that great mystery and that great gift. And at times when the future seems more than usually chaotic and uncertain, it doesn’t hurt simply to give thanks.”

Dr Williams will go to Rome next week, when he will have an audience with the Pope and deliver a public address at an ecumenical conference at the Gregorian University.

Let me be the first to say that the Anglican future looks all too predictable and certain ...DOOM!

Judging from his inane remarks, Rowan must be in complete denial at this stage. 1662 BCP, you are absolutely correct, and I was about to post the exact same thing! There is an ordered predictability to the calmly systematic destruction of the Canterbury Communion by Rowan Williams and his allies. There is no uncertainty about the continued disintegration, separation, and dismemberment that Rowan intentionally brings about. We can all count on it. 100% guaranteed.

The Anglican future looks "chaotic and uncertain"? All right, who told the archbishop? That was supposed to be a secret. Sheesh.

Chazaq,
My apology for stealing your thunder. I am also becoming more convinced that the apparent lack of response (actual applications) to the Vatican offer is not any accident either. Me smells a rat somewheres. Rome didn't used to make these kind of errors, erecting "white elephants".

Rolin, no, no, those commenters got it all wrong. What Rowan REALLY said was that the Anglican future would be "cathartic," not "catholic" and not "chaotic." So claim some other commenters, and they really know.

One free pass to the Laffin' Place and a glass of Milk of Magnesia to Chazaq.

But aren't some of those commenters unrecovered cathoholics?

Golly Gee, I wonder who has done everything in his power to make it that way?????

The JOY in all this Anglican angst is seeing God act as in Joseph's behalf, to bring good out of evil. Though Williams, Shori, Inc. mean it for evil, God is using their preposterous behaviors to wake, shake, sift and refine His Church.

And, a heckova lot less naive.

I hope some of you had a chance to read the Archbishops remarks on Remembrance Day. They were quite moving.

And to think I can remember when the conservatives thought RW would be their saviour! Ah the worm turns