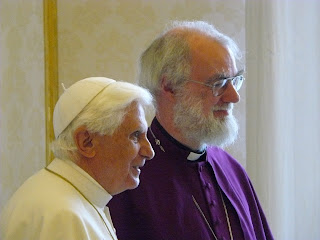 The Archbishop of Westminster has blamed Church of England bishops for keeping their leader in the dark about the Pope’s attempts to entice Anglicans to Rome.

As the Archbishop of Canterbury prepared to visit Pope Benedict XVI for the first time since plans to admit Anglican opponents of women priests into the Catholic faith were published, the Most Rev Vincent Nichols, head of the Roman Catholic Church in England and Wales, deepened the row.

Archbishop Nicholls said that it had been the “duty” of the Anglicans involved in the talks to keep their primate informed about the Pope’s plans.

The Archbishop was defending the Pope against accusations of discourtesy after he failed to alert Dr Williams of the proposals for an Apostolic Constitution, or decree to set up a new Anglican ordinariate. The announcement was sprung on a distressed Dr Williams last month with barely two weeks’ notice.

In an interview with The Tablet, Archbishop Nichols declined to comment on the accusation from the Anglican Bishop of Southwark, Dr Tom Butler, who accused the Holy See of discourtesy in failing to consult Dr Williams.

Archbishop Nichols said: “While approaches had been made to the Holy See, I don’t think that had been conveyed to the Archbishop of Canterbury. Frankly it was the duty of the Anglicans to do that.”

The Apostolic Constitution, published by the Vatican this month, enables thousands of disaffected Anglicans to become Catholics. Married Anglican clergy will be allowed to train for the priesthood in seminaries set up within the new Anglican ordinariates. The admission of married men will be “on a case-by-case basis”.

It even allows for married Anglican bishops to be granted the status of retired Catholic bishops, to become members of the local Catholic bishops’ conference and to be allowed to use the “insignia” of episcopal office, such as the mitre, pectoral cross and staff.

Former Catholic priests who left the Church to marry and subsequently became Anglican clergymen will not be permitted to return. More than one in ten Church of England priests who converted to Roman Catholicism over the ordination of women priests have returned to ministry in the established Anglican Church, according to figures released to The Times. Such priests have warned Anglican clergy against going over, with one saying that he had not been made welcome in Catholic churches.

A total of 441 clergy received compensation payments worth £27.5 million when they left the Church of England after the General Synod voted to ordain women priests in 1992. Of these, 260 went to the Catholic Church. Thirty-three have returned to stipendiary ministry in the Church of England.

Senior Catholics sought yesterday to quash speculation that the Pope’s visit to Britain next September had been downgraded from a State to a pastoral visit because of the dispute over the new Anglican Ordinariate.

The Queen, who was expected to host the Pope at Buckingham Palace, made no mention of a Papal visit in the Queen’s Speech yesterday. A Church source said that this was because the visit was not due to take place until the end of next year. Downing Street declined to comment.

It's fun laughing at the Anglican follies. Another invasion of England.

What? No Queenly tea at the palace?