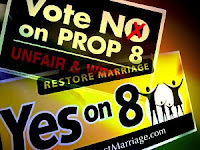 With the historic affirmation of Prop 8 by the people of the State of California that - with margins as wide as this week's presidential election - overturned the rulings of state judges to open up the floodgates to homosexual marriage in that most influential of states (and Jon Bruno popping his cork over the defeat), there is a lot of outrage spilling into the streets by activists who believe that those who voted in favor of Prop 8 are stupid - or worse.

But are they? Especially when such a majority of African American churches supported the measure? What does that say about them? What do they know - and the majority of those who voted in favor about Prop 8 - that The Episcopal Church doesn't know?

Church of England clergyman, Peter Ould, has given a lecture that may be of great timing in helping to understand the implications of this decision to defend marriage in California, as many struggle to put a context on what is happening in these crucial issues on the frontlines of politics and the church. He takes the current cultural anthropology of what is "gay" and what is "straight" and confronts that anthropological - and now quite political and theological outlook - unpacking the the arguments from a decisively biblical - and I would argue truthful - point of view.

There is so much to commend in this teaching as Peter Ould confronts the fallacies of the acclaimed bipolar and political view of human sexuality, but Galatians 5:1 comes to mind:

"It is for freedom Christ came to set us free.
Stand firm, then, and do not let yourselves
be burdened again by a yoke of slavery. "

UPDATE: Read more on what Peter Ould has written concerning Prop 8 in California here in his article Yes on 8, No on Prejudice.
Posted by Unknown at 10:43 AM

Thanks for posting this, BB!