Archbishop of Canterbury calls a Primates Meeting in Egypt 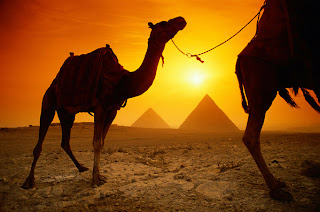 The Anglican primates will be meeting January 31-Feb. 6. From The Living Church:


Among the topics expected to be discussed are the proposed Anglican Covenant and the three-fold moratoria proposed during the Lambeth Conference by the Windsor Continuation Group.

In a letter written shortly after Lambeth, Archbishop of Canterbury Rowan Williams proposed using the indaba discussion process used during Lambeth for at least part of the primates’ meeting.
The primates will meet almost exactly two years after their last meeting, which was held in Tanzania.

What strikes us at first glance is that they have moved the venue from the presumed location of choice - the Bahamas where Anglican Covenant leader Archbishop Drexel Gomex resides, to Mouneer Anis' province in the Middle East. Interesting imagery, going back to Egypt. But perhaps all those archbishops out enjoying the Caribbean sunshine in the bleak mid-winter was not exactly what proponents of the public image would want to convey. No man is an island.

Or perhaps they just got better hotel deals in Egypt. Clearly this puts Mouneer Annis - as host - into a key position. What's not clear is whether Rowan Williams followed up on his promise to write to all the bishops who did not attend Lambeth to solicit their opinions on the current crisis and the Anglican Covenant - much to the chagrin of the leadership of The Episcopal Church.

Meanwhile there is a lovely little dinner party on the other side of the Big Pond tomorrow night that we're keeping our eye on.
Posted by Unknown at 12:29 PM