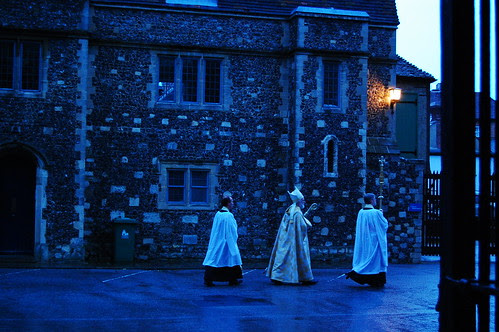 BB NOTE: I met Bishop Ellison while I was at Lambeth in Canterbury this summer. He kindly gave me and others a lift one day to the University of Kent where the Lambeth Conference was underway. He has excellent insights gained from his experience as being both a bishop in South America and as a Bishop in England. From here.

"I was asked to speak from a Southern Cone perspective and as a particpant in GAFCON (the only one present.) It was also helpful that I had been at Lambeth for part of the time, as a member of the Anglican Mainstream support team. I addressed the reality of the global movement of Christian growth and presence, moving from the West to the South, and described by Scottish missiologist, Andrew Walls as, "a massive southward shift of the centre of gravity of the Christian world".

The changing nature of Anglican Identity needed to be seen in this wider context. Leaders of growing Anglican Dioceses and Provinces, particularly in Africa, expected the strong recommendations of Lambeth 1988, (re-affirmed in Lambeth 1998) to be fully recognized and acted upon. Over the years they frequently referred to the fact that the Primates’ Meeting should, " exercise an enhanced responsibility in offering guidance on doctrinal, moral and pastoral matters", alongside the other Instruments of Communion (the Archbishop of Canterbury; the Lambeth Conference; the Anglican Consultative Council as well as the Primates Meeting.)

Global South leaders had in fact experienced growing frustration and disappointment in many meetings over the last 10 years, as they realized the Episcopal Church (TEC) and the Anglican Church of Canada were drifting ever further away from biblical and historic faith and mission, as well as the clear recommendations of Lambeth 1998. Nevertheless, these same leaders still received invitations to the 2008 Lambeth Conference. They had been defiantly unfaithful but remarkably were not disciplined; rather had been rewarded for the damage caused! These factors need to be recognized in order to understand why so many of the Global South bishops did not attend this year’s Lambeth Conference.

What we were likely to see in the coming months would be the following.

1. Further practical and pastoral realignment amongst faithful Anglicans (during the course of the Leeds meeting, the Diocese of Pittsburgh voted by a large majority to leave The Episcopal Church and come under the covering of the Southern Cone Province.)

2. The Common Cause Partnership will be recognized by the GAFCON Primates as a new orthodox Anglican Province in North America. A great deal of confidence and trust would be restored if the Communion’s Instruments of Unity also recognize this new orthodox Province.

After this introductory session, when I became aware that much of what I was sharing was new to those present, bishop Martin gave a personal perspective of his experiences at Lambeth. He emphasized in an anecdotal way, the great priviledge of meeting with leaders from Africa whose experience of suffering and deprivation went beyond anything he could have imagined. He expressed his thankfulness to God for the way they still lived out their Christian lives with great faithfulness.

Andrew Goddard concluded the morning session with a very able presentation, of how the post Lambeth situation was viewed from an "open Evangelical" perspective.
He spoke with particular insight about the great hope being placed in agreement being reached over the Anglican Covenant. He recognized that this process of subscribing to the Covenant would take its time and that it was seen by some as being "too little, too late".

After lunch the question time largely focussed on the Covenant Process and issues of Sexuality.

1. I was again struck by the widespread misunderstanding and in many cases, ignorance, of what is happening in the wider Anglican Communion. There seemed to be little awareness that what has happened to orthodox believers in North America could well happen here.

2. I was equally alarmed that some of those present were already assuming that we simply had to get used to being a church where widely divergent views and lifestyles were permitted. Questions and comments betrayed the extent to which an Evangelical understanding of Scripture had been compromised and how the prevailing cultutral attitudes were exercising strong influences within the life of the church.

3. I came away deeply concerned to see that we are indeed "drifting away" (Hebrews 2:1) from biblical and historic orthodoxy. The challenge particularly from within Anglican Mainstream, is to work with new vigour and understanding on the promotion of the Jerusalem Declaration and Statement, so that English Anglicans become part of this movement for the renewal of our Communion.