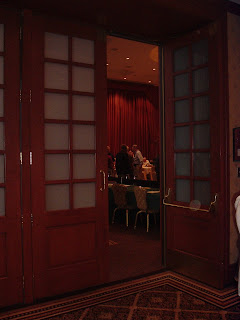 Bishop Gene Robinson of the Diocese of New Hampshire tells the truth:

Let me also state strongly that I believe that the Joint Standing Committee of the ACC and Primates MISunderstood us when they stated that they understood that the HOB in fact “declared a ‘moratorium on all such public Rites.’” Neither in our discussions nor in our statement did we agree to or declare such a moratorium on permitting such rites to take place. That may be true in many or most dioceses, but that is certainly not the case in my own diocese and many others. The General Convention has stated that such rites are indeed to be considered within the bounds of the pastoral ministry of this Church to its gay and lesbian members, and that remains the policy of The Episcopal Church.

The Windsor Report actually calls for a moratorium:

While we recognise that the Episcopal Church (USA) has by action of Convention made provision for the development of public Rites of Blessing of same sex unions, the decision to authorise rests with diocesan bishops. Because of the serious repercussions in the Communion, we call for a moratorium on all such public Rites, and recommend that bishops who have authorised such rites in the United States and Canada be invited to express regret that the proper constraints of the bonds of affection were breached by such authorisation. Pending such expression of regret, we recommend that such bishops be invited to consider in all conscience whether they should withdraw themselves from representative functions in the Anglican Communion. We recommend that provinces take responsibility for endeavouring to ensure commitment on the part of their bishops to the common life of the Communion on this matter.

The Most Rev. Dr. Mouneer Hanna Anis, Bishop of the Province of Jerusalem and the Middle East also pointed out, contrary to the assertions of members of the "Joint Standing Committee" in their report that such a goal had been reached when he wrote:

This is diametrically opposed to what the Joint Standing Committee wrote:

we understand the statement of the House of Bishops in New Orleans to have met the request of the Windsor Report in that the Bishops have declared “a moratorium on all such public Rites" ...

It seems that the JSC thinks it did happen - but of course, they left town 24 hours+ before the House of Bishops meeting ended, but went forward with their "report" anyway - a report now fully discredited. Not only do we have issue with the theological double mindedness of this JSC, we also have issue with the political process imposed by the Anglican Communion Office.

It is clear that "Cloak Room Deals" are the business of the day - but in order to make such deals, the deal makers have to have the power to deliver. There seems to be an assumption that the active gay community in the Episcopal Church is just going to go along with whatever Katharine Jefferts Schori wants (she authorized gay blessings herself in her old diocese, after all!) and that TEC will just go along as it always has, doing what it wants to do (like in the Diocese of Los Angeles) wink, wink and keep paying those bills for the ACC and the Anglican Communion Office. Can't shut off that pipeline, even if the "communion" for which those offices serves, no longer exists.
Posted by Unknown at 12:32 PM

With Bishop Robinson, to his credit, telling it like it really is in TEC, I hope the entire membership of the JSC understands how completely foolish it looks. It is plain for all to see that JSC's grasp on reality is non-existent. How anyone could find the JSC's work of any benefit whatsoever is a mystery!

Whenever I read anything that spews forth from the likes of Mr. Robinson & Co., I am reminded of the old song "How Can I Believe You When You Tell Me That You Love Me When I Know You've Been A Liar All Your Life."

As some may remember, the orthodox and the progressives suddenly found themselves on the same side when B033 came up at General Convention in Columbus and it took the intervention of the new Presiding Bishop strolling in an unprecedented move onto the floor of the House of Deputies to get B033 passed.

I'm really coming to the conclusion that their is an ethos of manipulation inside TEC, that it infects both sides of the issue. An irony is now there are folks on both sides calling for Matt 5:37 & James 5:12 language.