The CANA Council kicks off today 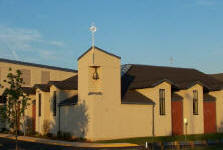 HERNDON, Va. (July 27, 2009) – This week, the Convocation of Anglicans in North America will hold its annual council meeting featuring as keynote speakers Dr. Steve Garber of the Washington Institute for Faith, Vocation, and Culture and the Most Rev’d Ignatius Kattey, Regional Archbishop of the Church of Nigeria. The Rev’d Canon Julian Dobbs also will be a featured speaker, addressing the challenge of Islam to Christians in the U.S. As CANA continues to grow throughout the United States and serve as a leading voice in the orthodox Christian movement, speakers will tackle tough issues such as:
“Since CANA continues to grow both spiritually and in the number of congregations, we must address the issues we face in modern society to ensure that orthodox Anglicanism remains a sanctuary for those wishing to spread the Gospel of Jesus Christ and experience profound transformation through Him,” said the Rt. Rev’d Martyn Minns, Missionary Bishop of CANA, who will give a Friday address to the Council on the growth of CANA and orthodox Anglicanism in the U.S.

CANA Council is an annual gathering of clergy and lay delegates from member parishes across the county. The meeting will take place at CANA’s headquarters located at Church of the Epiphany in Herndon, Va., from July 30 – August 1, 2009. The Council will conclude with a festival Eucharist on Saturday that will include the ordination of several new CANA chaplains. More details can be found on the CANA website at www.canaconvocation.org.

The Convocation of Anglicans in North America currently consists of more than 75 congregations and 160 clergy in 21 states. CANA was established in 2005 to provide a means by which Anglicans living in the USA who were alienated by the actions and decisions of The Episcopal Church could continue to live out their faith without compromising their core convictions. Created as a missionary initiative of the Church of Nigeria, about a dozen of the congregations are primarily expatriate Nigerians. CANA is a founding member of the Anglican Church in North America, an emerging Anglican province that includes about 700 congregations.

PM UPDATE: What a day - a full day! The CANA Council continues to grow and this year the council seemed to move from "What's it all about?" to "We are family" - it did feel much more like a family this year, with not only reunions with friends from the past, but also lots of new faces - some I met at the ACNA Conference last month and other who have come into CANA since last year, as well as others who are in the process of transferring in.

The Legislation Session is not until Saturday morning when the real "news" will be made. Today was much more like Day One of a family reunion and meeting all the new members. Of course, much of the buzz is how we will work out being part of ACNA, not only as CANA but also as districts and individual parishes as well.

Daryl Fenton from Archbishop Bob Duncan's office is here and when I met up with him I said, "Ah, one of the Jedi!"

I don't think he's ever been called that before.

Tomorrow is CANA Bishop, Martyn Minns' "State of CANA" address. Kevin Kalsen of AnglicanTV is also here and we'll aim to put his videos. I will try to do some as well, so stay tuned!
Posted by Unknown at 7:55 AM

Well, BB, at least the Church of Nigeria has not sent Bishop Alfred Nwaizuzu as its representative to this meeting, as it did to the recent inaugural assembly of ACNA. A remarkable story - long-ish, but stick with it - as I'm sure you'll agree. All of which, I guess, pales into insignificance weighed against the sin of consecrating an openly gay bishop.

The challenge of Islam to Christians in the US? Please tell us more about this.

I hoped to make this council but was overcome by events. Still, I look forward to your reports from the front pew BB.