Saturday, July 26
UPDATED: Please see the end of the post.

Have just received news that Horace Boyer passed away Tuesday. He had a major impact on my parish, Truro Church, when he came for a visit in the 1990s and ended up changing everything. He led the choir at Truro for a period and over the years taught our more traditional organists and choir directors how to do Gospel from the inside out. Our parish has never ever been the same. I loved Horace and I know, I know he's rockin' in heaven. It'll be a better place because he's there. But our own world feels the loss. May every voice lift up and sing and give praise to God for this marvelous man - who changed our world once voice at a time. Good bye, Horace. We'll miss you so much.

Here's an example of a choir singing one of Horace's arrangements, one that is very well known at Truro.

Here's more information on Horace here and below: 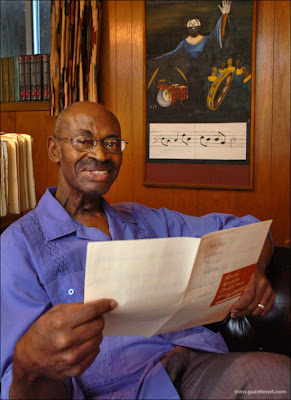 He was born July 28, 1935 in Winter Park, Fla. to Mr. & Mrs. Climmie, Sr. & Ethel M. Boyer. He was the fourth of eight children born to this union. He was a graduate of Bethune-Cookman University (Daytona Beach, Fla.) and held masters and doctorate degrees from the Eastman School of Music (Rochester, N.Y.). His teaching career included tenures at Albany State College (Georgia), the University of Central Florida at Orlando and from 1973 to 1999, the University of Massachusetts as a member of the Faculty of Music and Dance.

As a very young boy, he formed a gospel-singing duet with his brother, James (a Professor of Education & American Ethnic Studies at Kansas State University). As the Boyer Brothers, they began recording as teenagers, making several recordings for Excello, Vee-Jay and Savoy Records. He also wrote liner notes for re-issues of Mahalia Jackson records for Columbia Records.

As a gospel performer, he traveled into some 40 states. Additionally, he served as a lecturer and clinician on gospel music and the African American Sacred tradition. One of the highlights of his career was being named as Curator of Musical Instruments at the National Museum of American History, Smithsonian Institution.

During his residency at the Smithsonian, he also served as Distinguished Scholar-at-large of the United Negro College Fund, where his duties included directing the famed Fisk Jubilee Singers. Boyer's research resulted in the publication of over 40 articles in journals such as Music Educators Journal, the New Grove Dictionary of American Music, the Black Music Research Journal, and Black Perspectives in Music.

He is the author of HOW SWEET THE SOUND: The Golden Age of Gospel Music, published in 1995. For several years, he was director of the Voices of New Africa House Workshop Choir, an ensemble of 50 voices drawn from Smith, Amherst, Mount Holyoke and Hampshire Colleges as well as the University of Massachusetts. Their specialty was gospel music.

Boyer is listed in the Biographical Dictionary of Afro-American and African Musicians, as well as International Who's Who in Music and Musicians' Directory. The recipient of a Ford Foundation Fellowship, he served on the Editorial Advisory Board of the journal, REJOICE.

In recognition of his teaching and contributions to music, Boyer was named a Chancellor's Distinguished University Lecturer by the University of Massachusetts in 1990 and was awarded the Chancellor's Medallion.

During his career, he received many citations, awards and honors from schools, colleges, churches and professional groups including the Martin Luther King Heritage Award from the city of his birth in Florida, the Lifetime Achievement Award of The Society of American Music which he received during their Denver Conference in 2009 - as well as the Union of Black Episcopalians in 2008.

A private graveside service is planned. A public memorial service, to be held at Grace Episcopal Church, will be held at a later date. Obituary and register at http://www.facebook.com/l/;www.douglassfuneral.com

Here's an example of Horace's influence even now on Truro, from 2008:


Just received this from George Mims, editor of Songs of Celebration, a supplement to the 1940 and 1982 Episcopal Hymnals: 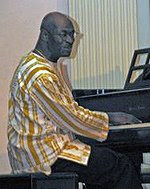 Horace Clarence Boyer passed away today. Horace was a gentleman of distinction in the world of worship through music. His gifts as both pianist and singer have deeply moved the hearts and lives of literally thousands of persons throughout the Christian Church in this country and abroad. Horace played gospel music in a fashion and style like no one else! He lead with conviction and preached God's Word even as he improvised hundreds of favorite and beautiful tunes and texts in the midst of small to huge gatherings of us who were hungry to participate in such a edifying yet thrilling moment of adoration, worship and praise.

Horace came annually to Truro Church in Fairfax City, VA for a week each year to conduct black gospel singing in the wonderful setting of the lovely chapel there each night. Justice Clarence Thomas would have his whole family sitting on several rows of pews early to be in the midst of this timeless inspirational praise! The Thomas family, Ginny and Justice Clarence, invited Horace to the private chambers of the Supreme Court where some 200 persons from the Hill attended and learned to sing in four part harmony with spirit: Soon and very soon we are going to meet the King! Oh, what a thrilling experience it was to be on the Hill that day! 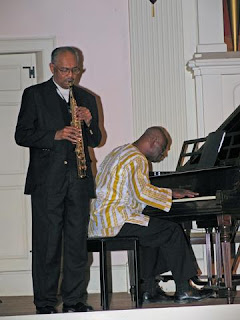 AND so it is that today, Horace is face to face with Jesus Christ, his personal Saviour, confidant, lover, companion, joy giver, centre of praise, and Redeemer! Oh how sweet the moment must be for him to be there with his body healed and his voice whole!!!

Lord Jesus Christ, we commit to your infinite hands, this child of yours, born a sinner and saved by grace, given JOY everlasting, and comforted through adversity by your presence. Jesus, know of our unending love for him and thanksgiving for all he has done in your Name on the face of this finite earth. Thank you, O my Father, for giving us your Son and for giving us Horace to magnify you Son's Holy Name through the eternal gift, mentioned in Holy Scripture, to be continued in the Heavenly Places: MUSICAL PRAISE! AMEN

Into paradise, Horace Clarence, be received of angels and with Lazarus, once a poor beggar, be received into the
Holy City JERUSALEM,
City of Peace. AMEN.
YES ... Horace, Light Perpetual shines upon you and you have been granted eternal rest. The Peace of the Lord is with you always!

George Mims has served on the national Standing Commission of Church Music and is music editor of Songs for Celebration, a supplement to the 1940 and 1982 Hymnals. He has served at St. Martin's, Houston, TX; Second Congregational Church, Greenwich, CT; Church of the Redeemer, Houston, TX; Calvary/St. George’s Parish, New York City; St. Philip’s Church, Charleston, SC; Truro Church, Fairfax City, VA; and St. Andrew’s Church, Kansas City, MO. His early studies in organ were with Anthony Rahe and William Barnard. He earned his undergraduate degree in viola and sacred music from Baylor University. He received his master of sacred music degree in organ and conducting from Union Theological Seminary in New York City where he studied with Claire Coci.
Posted by Unknown at 5:04 PM

BB, there are people who come into your life and just end up in your heart, and Harold Boyer was one of them. If I ever want to remember the most spirit-filled moments in my life, the Pentecost weekend when he came to St. Margaret's in Woodbridge, so many years before we ever thought that we would later be so divided, that is the weekend that I would remember. Prior to that, our entire choir had joined you at Truro when Horace came for your weekend, and we knew that we had to have him come to St. Margaret's, which he soon did. That was a LIFE; that man was real and spirit-filled and what joy he displayed in his music! If anyone could have brought us together again, he surely would have been the one. He will be missed, but we will always "Lift Every Voice and Sing", will we not?

We were privileged to have him lead us at our big diocese-wide "Tent Meeting" in Mississippi, in 2005. The theme of the meeting was water, and we sang "Wade in the Water" under his leadership until it seemed like the whole tent would just fly away, and us along with it! Ironically, it was the weekend before Katrina.
What a wonderful experience to have been in that tent with Mr. Boyer.

As one put it:

Our loss is certainly Heaven's gain.

I'm glad our paths crossed to met such a special saint.

One of the gifts that Horace Boyer gave the Church was the joy that touched the hearts of people on all sides of the issues that have divided us.

There's lots of things we differ on but Horace Boyer is not one of them! He was such a hugely talented musican AND minster of music ... a rare and fabulous "combo plate" of talent! I had the privilege of working with him in the LPM program at VTS and then again here in Los Angeles when he came to lead a clergy conference for us. I am absolutely sure the heavenly chorus of angels and archangels are already singing with more energy and enthusiasm now that Horace is in the house! May he rest in peace and rise in glory!

Horace was the best. He went to my church, but was often on the road--I spent the most time with him at the 2006 Episcopal Convention, and learned so much.
I'm always shocked to go into an Episcopal church and not find Lift Every Voice and Sing; it's like finding your arm is gone.
He's gone home, and the angels are singing a lot better, but I'll miss him.

Horace C. Boyer was one of the first people I met when I joined the UMASS community. As costumer and choreographer of one of the rare FAC produced musicals, 1776 I both dressed him and bossed him around on stage. That must have been why he pulled my leg about having gone to Juilliard.

What stands out from many wonderful subsequent meetings are:

* Horace at the piano, Hotel NoHo,FAC gala, being real with and soaring with Come Sunday.

Hi, we at Amherst Community Television in Massachusetts have put several programs featuring Horace Boyer online to watch at http://www.actvamherst.com

Thank you so much, James!!