Highlights from the BBC of the enthronement of the 105th Archbishop of Canterbury:

Chris Sugden of Anglican Mainstream writes in The Times:

I left the installation service for Justin Welby as Archbishop of Canterbury feeling the same as after the Royal Wedding or the Diamond Jubilee or the Olympics. Archbishop Robert Runcie said that some events inspired energy and other events drained energy. He would have been greatly energized by yesterday’s installation. 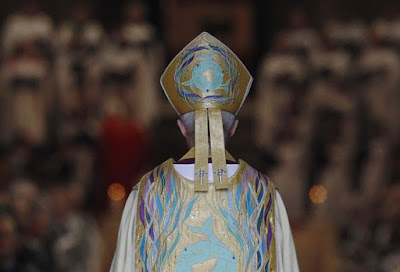 Archbishop Justin Welby began the service with a new and fresh piece of liturgy written by himself.

Following the traditional three knocks, the great west doors of the cathedral opened to frame Justin standing in silence his hands in front of him grasping his bishop’s staff. Standing in front of him was the slim figure of a dark haired girl in a green sari. She asked him: “Who are you and why do you request entry?”

“I am Justin, A servant of Jesus Christ, and I come seeking the grace of God, to travel with you in his service together.”

Evangeline Kanagasooriam, standing less than forty feet from the font where she had been baptised 17 years ago, continued: “How do you come among us and with what confidence?” “I come knowing nothing except Jesus Christ and him crucified, and in weakness and fear and in much trembling.”

One suspects that this liturgy will find its way into future entrances of other bishops into their cathedrals, not inappropriate for the day that the church remembered Thomas Cranmer the father of the English Prayer Book.

As the Archbishop’s procession made its way into the Cathedral, he stopped particularly to greet Evangeline, an academic and music scholar at the King’s School, who was sitting with her mother, a long standing member of the Cathedral congregation at the very west end of the nave. Behind them sat the press corps, who flocked around them both at the end of the service, not least to express appreciation for Mrs Kanagasooriam’s wonderful singing during the hymns. Unsurprisingly she is a trained singer.

And the hymns were worth singing with all our heart. “When I survey the wondrous cross”, “The Church’s one foundation”, “In Christ alone my hope is found”, Wesley’s “And can it be that I should gain an interest in the Saviour’s blood”, “Great is thy faithfulness” – these are the great hymns of the church chosen by Archbishop Welby that speak of the centrality of Jesus as Lord and his death for sin.

The service designedly had elements from around the Anglican Communion. A lovely hymn by the Sri Lankan writer D.T.Niles, ‘Saranam, Saranam, Saranam”, the signature hymn of the Churches of the Indian Sub-Continent; a prayer in French from the Primate of Burundi, and those Ghanaian drums. African drums in worship are a signature of the Archbishop of York, who may have given advice, but close neighbours of Justin Welby in Liverpool close were also the (now retired) Archbishop of Ghana and Mrs (Dr) Akrofi.

In his sermon, Archbishop Welby used the word risk three times, the word courage eight times, and Jesus or Christ twenty four times. His text was “Take heart, it is I, do not be afraid” from Jesus’ call to Peter to walk on water. Immediately he said “Uniquely in all of human history, Jesus Christ, the Son of God, is the one who as living love liberates holy courage”. Then “the utterly absurd is completely reasonable when Jesus is the one who is calling.”

He was clear and confident about the contribution of the Christian faith to public life in Britain. “For more than a thousand years this country has to one degree or another sought to recognise that Jesus is the Son of God; by the ordering of its society, by its laws, by its sense of community… Slaves were freed, Factory Acts passed, and the NHS and social care established through Christ-liberated courage.”

On Tuesday morning in preparation for the enthronement John Humphreys chaired a broadcast debate on BBC Radio 4 on whether Christianity was at a crisis or crossroads. It culminated in a discussion of whether God was needed to have morality. Archbishop Justin gave his own answer in his sermon – you need Jesus Christ for the courage to practice it, both personally and nationally and for the forgiveness when you fail: “Courage is released in a society that is under the authority of God.” He immediately tackled issues of immigration through the Biblical story of Ruth – “a Moabite refugee – utterly stigmatised, inescapably despised – taking the huge risk of choosing a God she does not know in a place she has not been, and finding security when she does so. The society Ruth went to was healthy because it was based on obedience to God, both in public care and private love…There can be no final justice, or security, or love, or hope in society if it is not finally based on rootedness in Christ.”

After the service I happened across Ed Milliband, about to leave the precincts. “It’s a great appointment” he said. Hopefully Archbishop Welby will have time and opportunity to share with him more about a society needing to be under the authority of God.

Later in the evening Archbishop Welby met other primates over dinner in Rutherford College at the University of Kent, seated by a window that frames the floodlit Canterbury Cathedral. The Primate of Kenya gave him a letter later released like other letters the Archbishop has recently received. It emphasises that he and others from Africa and Latin America came to take part in the ceremony and the celebration and worship. Discussion of issues facing the communion would be for another time and place.

Grace and peace to you from God our Father and The Lord Jesus Christ.

We greet you on this day of celebration and assure you and your family of our prayers for your future ministry.

We are grateful for this opportunity to worship in Canterbury Cathedral and be reminded of our historic faith that is grounded in the revealed Word of God.

We encourage you to stay true to the ‘faith once delivered to the saints’ and as you do we will stand with you for the sake of Christ.

We do look forward to a future opportunity to meet and discuss how we can work together.

To Him be all the glory.

The Most Revd Dr. Eliud Wabukala Anglican Church of Kenya

The Most Revd Nicholas Okoh Church of Nigeria (Anglican Communion)

The Most Revd Stanley Ntagali Church of the Province of Uganda

Following the service I asked an African Primate for his assessment. “Courage needs company” he said.