BREAKING NEWS: Diocese of Ft. Worth wins in the Texas Court of Appeals 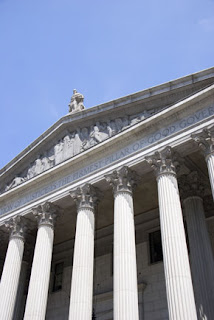 We give thanks for the decision just issued by the Texas Court of Appeals in Fort Worth. The decision is posted on the diocesan Web site at http://www.fwepiscopal.org/downloads/CourtOfAppeals062510.pdf

A statement concerning the court's decision will be issued by Bishop Iker on Monday, June 28.

Suzanne Gill
Director of Communications
The Episcopal Diocese of Fort Worth


UPDATE - via e-mail: Statement from the Diocese of Ft. Worth:


FORT WORTH, Texas – On Friday, June 25, the Texas Second Court of Appeals granted the
Diocese's Petition for Writ of Mandamus and instructed the 141st District Court to modify its ruling of Sept. 16, 2009, to the effect that there cannot be a second Episcopal Diocese of Fort Worth and a second Corporation of the diocese.

In April 2009 attorneys for The Episcopal Church joined Mr. Jonathan Nelson and Ms. Kathleen Wells, representing local TEC interests, in a suit against the Diocese and Corporation. The case was assigned to the district court under the Hon. John Chupp.

Applying neutral principles of law, Friday's decision found that “a corporation cannot sue itself” and that “it is undisputed” by both plaintiffs and defendants “that there is only one Corporation and one Fort Worth Diocese.”
“[W]hile Mr. Nelson and Ms. Wells may be authorized to represent the individuals who hired them,” the appellate court said, “these attorneys have not established their authority to represent or appear on behalf of the Fort Worth Diocese and Corporation as required by rule 12 [of Texas Rules of Civil Procedure].”

The ruling dismisses that portion of the original suit that “is purportedly brought on behalf of the Corporation and [Fort Worth] Diocese.” The trial court must “strike the pleadings filed by Mr. Nelson and Ms. Wells on behalf of the Corporation and the Fort Worth Diocese and bar them from appearing in the underlying cause as attorneys of record for those named plaintiffs.” The appellate court also lifted the stay of proceedings, clearing the way for the trial court to comply.

Responding to Friday's decision, Shelby Sharpe, attorney for the Diocese and Corporation, said, "We are very gratified by the excellent and well-reasoned opinion from the Fort Worth Court of Appeals. It simply follows the plain language of the law on what is required for an attorney to represent a party in a court proceeding."

To the plaintiffs' argument that this decision could be delayed, the Court of Appeals responded that there was no need to wait for the eventual conclusion of the trial to correct the trial court's abuse of discretion, since that could add unnecessary costs to the burden of litigation initiated by the April 2009 suit. It noted, too, that the trial court judge would be “unnecessarily confused by presentations from two opposing factions who claim to be the Corporation and the Fort Worth Diocese.”

While it declined to settle the question of “identity,” the appellate court affirmed that conventions of the Diocese and the Corporation formed in 1983 and led by Bishop Iker voted in 2007 and 2008 to withdraw from membership in TEC and enter into membership in the province of the Southern Cone, and that Bishop Jack Iker and the Corporation's board were all duly elected to their positions.

Bishop Iker has responded to the ruling saying, "We rejoice in this favorable decision by the Court of Appeals, and we give thanks to God for the expertise of our legal team in enabling us to prevail in this critical issue of who can represent the Diocese and the Corporation. While we realize that our opponents will continue to pursue litigation against us, this successful first step reinforces the soundness of our legal strategy to protect our identity, our property, and our assets."

Bishop Iker requests continuing prayers of thanksgiving and guidance for our lead attorneys, Shelby Sharpe and Scott Brister. The Episcopal Diocese of Fort Worth was organized in 1982. It is a constituent member of the Anglican Communion and the Province of the Southern Cone. The Rt. Rev. Jack L. Iker has served as the third diocesan Bishop of Fort Worth since 1995. The diocese enjoys companion relationships with the Dioceses of Northern Malawi and Northern Mexico.