Sunday Night at the Cafe: Billy 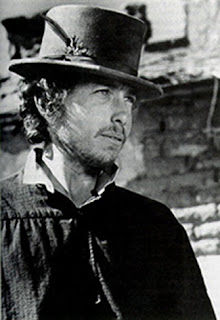 UPDATED: We now have the audio from Bob Dylan's concert last night in Stockholm, Sweden, of his first-ever live performance of Billy from his soundtrack for the film, Pat Garrett and Billy the Kid (see at the end of this post).

Mr. Dylan is back on his "Neverending Tour" tonight - opening his 2009 tour in Stockholm, Sweden. Dylan affectionadoes have been speculating all day what the playlist will be (not one song from Modern Times). Will the band change? Will he play the guitar? Oscar still taped to the amp? Hat - or no hat?

He surprised everyone tonight by putting Billy in his playlist. Someone will know how long it's been since he played Billy, but it's certainly not in recent memory (update: early reports are that Dylan has never played Billy live). It sure is an intriguing choice, taken from his score for the orginal soundtrack for the Sam Peckinpah 1973 film, Pat Garrett and Billy the Kid. The hit song from the soundtrack was Knockin' on Heaven's Door.

Here are the lyrics for Billy 1:

There's guns across the river aimin' at ya
Lawman on your trail, he'd like to catch ya
Bounty hunters, too, they'd like to get ya
Billy, they don't like you to be so free.

Campin' out all night on the berenda
Dealin' cards 'til dawn in the hacienda
Up to Boot Hill they'd like to send ya
Billy, don't you turn your back on me.

Playin' around with some sweet senorita
Into her dark hallway she will lead ya
In some lonesome shadows she will greet ya
Billy, you're so far away from home.

There's eyes behind the mirrors in empty places
Bullet holes and scars between the spaces
There's always one more notch and ten more paces
Billy, and you're walkin' all alone.

They say that Pat Garrett's got your number
So sleep with one eye open when you slumber
Every little sound just might be thunder
Thunder from the barrel of his gun.

Guitars will play your grand finale
Down in some Tularosa alley,
Maybe in the Rio Pecos valley
Billy, you're so far away from home.

There's always some new stranger sneakin' glances
Some trigger-happy fool willin' to take chances
And some old whore from San Pedro to make advances
Advances on your spirit and your soul.

The businessmen from Taos want you to go down
They've hired Pat Garrett to force a showdown.
Billy, don't it make ya feel so low-down
To be shot down by the man who was your friend?

Hang on to your woman if you got one
Remember in El Paso, once, you shot one.
She may have been a whore, but she was a hot one
Billy, you been runnin' for so long.

Guitars will play your grand finale
Down in some Tularosa alley
Maybe in the Rio Pecos valley
Billy, you're so far away from home.

And here's the song off the original score:

Incidentally, Bob Dylan was Alias, a shopkeeper who becomes a member of Billy the Kid's gang in the film. Dylan steals this scene in his first appearance in the film (no small matter considering that the director, Sam Peckinpah could not at first remember who Dylan was) in the famous shop scene where Alias is ordered to call out the names of all the soups off the shelf while an interrogation is going on. Dylan's name may have been "Alias" (Masked and Anonymous as he always is) but in this scene he might as well have gone by the name Chaplin.

There are several titles called "Billy" on the film's soundtrack including Billy, Billy 1, Billy 4, and Billy 7. No pretentions here. Early reports are that he did Billy 1, which includes the lyrics, though the debate continues on whether it was Billy 4. The feel of the 2009 show, say these same reports, is "Border Cafe." Rounds of Fire Whiskey for all.

LATER: Here is the setlist - with an accounting of how often (or how rare) Dylan adds a song to his setlist.

Remember, Dylan never does the same set list in a row. He has been on the road every year doing hundreds of shows since the late 80s and he doesn't do the same setlist each night. He will get on to certain songs for a while, reworking, rearranging, and rephrasing them and then suddenly something will come out of nowhere - like when he did House of the Rising Sun the last time he was in Scotland for one night only. In it came and out it went, who know's why?

I remember one show I went to when I was near the stage and some relic from the 60s was standing next to me shouting "Hurricane! Hurricane! Hurricane!" over and over at Dylan. It was annoying - Dylan hasn't done Hurricane in forever (I may have still been in college the last time he did Hurricane). Maybe this guy is the reason why. Finally, I turned to the poor guy as he took a breath between shouts and said, "You know, I don't think he's going to do it." The guy stopped and looked down at me, his shoulders deflating as his head sank, it was as though the air was just let out of the tires of his feet, and then he simply melted back into the crowd.

MONDAY PM UPDATE: Here it is - the audio from the show last night in Stockhold of Bob Dylan's first live performance of Billy:

Here's the setlist from last night:

Happy Birthday! Hope the day is great. And God grant you many years!

Always loved soundtrack to Pat Garrett and Billy the Kid. Turkey Chase is great for the treadmill.
Many happy returns!