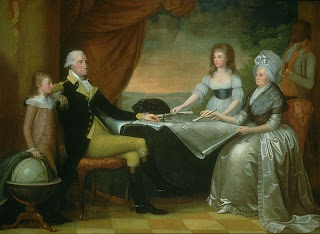 A family tradition has sprung up over the years and this year it returned. We joined the annual planting or laying of the shamrocks from the Irish Embassy in Washington at the grave of George Washington Parke Custis, adopted grandson of President George Washington.

The Protestant Custis was known as a friend to the Irish people and a leading advocate of Irish freedom in the early part of the 19th century. He was very actively involved in Irish American affairs in Washington, DC before his death in 1857. Before he died, he wished aloud that someday an Irishman would come by and place a shamrock on his grave and say, "God bless him."

Custis grew up at Mt. Vernon and was raised by his adopted grandfather, George Washington. As a child, he heard the many stories from President Washington of the Irish involvement in the American Revolution. Washington attributed a great part of his victory in the revolution to the Irish serving in the American army.

This year we brought along the FlipVideo. Enjoy and "God bless him."

Here is the full text (in both England and Gaelic) of the message from the President of Ireland President Mary McAleese for St. Patrick's Day that was read by the press officer from the Embassy of Ireland in Washington, D.C.
Posted by Unknown at 1:00 AM

May his memory be eternal.

That's fascinating, BB. I think you may have just provided a very important piece in a genealogical puzzle involving GWP Custis that has dogged one of our family lines for many years. Thanks.

The musical 'background', however, is instead a foreground and kind of frustrating.

Yeah, I was having some issues last night. I agree. The reading from the letter of the President of Ireland, was hard to hear anyway. I'm going to see if I can find the text and put it up. If it's the bagpiper, he was in the foreground.

Other Anon, that's very interesting about the genealogical puzzle. Could you share more?

It's the same 'Anonymous'. I like the music BUT I did want to hear the speaker, that's all.
If you want to e-mail me at pam-at-horow-dot-net I will share more about the puzzle. It is fairly specific to GWP Custis, Washington DC in the earliest 1800s and the author Allen Tate. It was his genealogical puzzle as well as mine, and I think I recently solved it, but the theme of your post adds support to my previously unsupported theory.

Perhaps I should have also said, I published a short paper on this genealogical problem in Dec. 2005 in the Tidewater Genealogical Society periodical, so it's not just a 'pet theory' personal thing. In that paper I had to leave unsupported a suggestion that GWP Custis may have played an important role in the life and career of a particular descendant of Irish colonials so your online piece seemed very relevant.