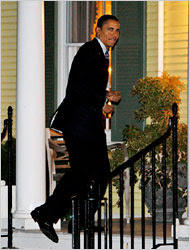 Wonder what The Other Side is going to say about this one. Any more room on the bill at the Lincoln Memorial Concert on Sunday?

From The New York Times:

Mr. Obama, who has been staying at the Hay-Adams Hotel in advance of his inauguration next week, arrived at 9 Grafton Street, an upscale address in Chevy Chase, Md., at 6:34 p.m. The Montgomery County property tax records list this address as the home of the conservative Washington Post columnist George Will, the host of the dinner party. Also attending the party was Charles Krauthammer of The Washington Post. Together, some of the columnists at the dinner party have been some of Mr. Obama’s severest critics.

Obama transition officials refused to comment on the dinner, saying that it was off the record.

BB NOTE: Oh, to be a fly on the wall. Wonder who catered? The photo is of the President-elect arriving at George Will's house in Chevy Chase tonight. There are times when we really miss William F. Buckley and this is one of those times - oh, that he could be at soiree! The wit! To bad they didn't just ring up our reluctant scribe (he doth protest a bit too much we think) - though the furniture might have started flying (or perhaps not). But there would be wit!

If we could add one more to the Table at George's House, however, we'd add one of our heroes. Wonder if anyone else was there, or was it indeed Guys Night Out?
Posted by Unknown at 11:28 PM

You are scraping the bottom of the barrel here, BB. The rest of us are very hopeful. Check out my blog on this. I won't edit your comment if you do. Jahweh, God of History. Games must be played, but the Author always "wins". Good bye and good luck.

BB, George will is bright enough not to shun a Dem president. He has praised and criticized both sides of the aisle.

Yes, 9 Grafton is a nice address there by Chevy Chase Club and the circle. But I confess to a preference for the homes over by Burning Tree club, more trees and land. I'm a Columbia club brat myself, though we lived in Bethesda.

Kevin said...
This comment has been removed by the author.
7:21 AM

We've seen all sorts of cross-political cavorting in the off hours through the years. Sometimes it seems as if this town is like Ralph & Sam clocking in for another days work ...

And, now that it is Wednesday, the news reports that tonight he is dining with the "liberal press." (Channel 4's words)

In fact, I think that the inimitable Ms Noonan was indeed there!