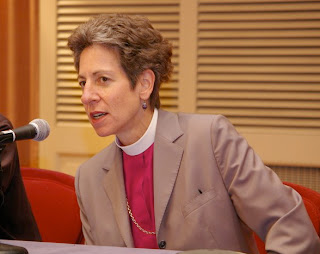 BB NOTE: Here is the transcript, thanks to a generous poster at TitusOneNine, of the BBC interview with Katharine Jefferts Schori. It's a doozy. One question, who is her intended audience?

On one hand we have these new postings by the Archbishop of the Southern Cone. On the other hand, we have jubilation here.

So we return to the initial question, who is the intended audience for this interview?

KJS: The bishop of New Hampshire was duly and canonically elected, and consents received to his election, and duly consecrated. He is a bishop in this church in good standing.

BBC: It must be a pretty lonely place though to know that no one else quite like you is now going to be elected to be a bishop.

BBC: In your own church?

KJS: Within our own church and within the Anglican Communion as a whole.

BBC: And so how do you respond to the fact that in a sense the Episcopal Church, your church, is paying the price for an honesty which other churches, perhaps even the Church of England, aren’t quite prepared to have?

KJS: Well that’s certainly a significant part of the current conversation. The Episcopal Church lives in a society that values transparency, increasingly values transparency, in all kinds of operations, not just within the church. To have other parts of the Communion express distress at having to have conversations about sexuality, is certainly understandable in terms of different contexts, yet that is where this church has felt led to be and felt led to have conversation, to bring these issues out into the public sphere where we can do public theologizing about them.

BBC: But you seem to be saying there’s a problem if other churches in the Anglican Communion aren’t prepared to be honest about the fact that they too have gay bishops?

KJS: Well it’s certainly a difficulty in our context. I think there’s a growing understanding in this church of how it can be problematic in other contexts, but there’s certainly a double standard.

BBC: The other issue is in relation to same sex blessings, the notion that the church would have an official service in order bless same sex couples. Again, the Episcopal Church has made this concession, said that there won’t be any authorized rites of blessing for same sex couples, but your opponents say that that’s all very well, but the reality on the ground is that those services are already happening and they continue to happen.

KJS: Well those services are, yes, are happening in various places including in the Church of England, where my understanding is that there are far more of them happening than there are in the Episcopal Church, at least in the United States.

BBC: But in terms of your own church are you happy to see individual parishes having actual services of blessing for gay couples?

KJS: That’s a matter for pastoral practice in the congregation and it’s a matter of decision for individual bishops.

BBC: But you’re not saying that those services shouldn’t be happening at all in any Episcopalian parish?

KJS: That’s not a matter for me to say yea or nay, it’s a matter of pastoral practice in individual congregations, in the same way that I don’t enter into decisions about whether or not it’s appropriate to bless a fleet of battleships going off to war.

BBC: There are those who would just say its not good enough to, on the one hand say that the official position is these must not happen, and then on the other to be so open about the fact that they do happen at the local level.

KJS: Our church, in the Episcopal Church, functions rather differently than some other parts of the Communion. The complaints that we should withdraw because we’ve done something that’s inappropriate often come from portions of the Communion where decisions are made fairly unilaterally, often by bishops, and I think a part of the controversy that’s often not recognized has to do with this different way of coming to theological conclusions and not looking alone to bishops to make policy and set decisions.

BBC: Is it possible for the Episcopal Church to continue to welcome and celebrate the role of lesbian and gay people and stay in the Anglican Communion in the same capacity?

KJS: We’re in a challenging place. I certainly hope that we’re able to move through this. My hope is that the Episcopal Church and the Anglican Communion as a whole might remember our roots, our traditional valuing of diversity and our traditional sense that worshiping together despite differing views is what holds us together.

BBC: Of course for the Anglican Communion one of those rare gatherings of all bishops together is coming up in 2008, the Lambeth Conference. Some African churches are saying that if the Episcopal Church is allowed to attend, given what its done in relation to Gene Robinson, given what it perhaps doesn’t quite enforce in relation to gay blessings, that there really shouldn’t be a place at the table, as it were, for the Episcopal Church. How do you respond to those complaints?

KJS: Well that feels to me much like declining an invitation to a dinner party because somebody I don’t like might be there. My understanding of the planned program for the Lambeth Conference is one that has the possibility of letting people build relationships. I think that’s a remarkable gift. I think it would be very sad to go there and simply spend all our time consumed by legislation and I don’t think that’s what’s planned.

BBC: And you’ll be there so it’s up to those who are opposed to you to decide whether or not they too will attend.

KJS: I would hope that all invited people, all bishops of the Anglican Communion, might be there in conference and in community with each other.

BBC: And how much of a setback is it that Gene Robinson, who as you said, is an official bishop of the Episcopal Church, doesn’t have that invitation?

BBC: Do you think he might still be invited?

KJS: I would very much hope so.

BBC: Have you had any indication that that may be the case?

KJS: We’re still hoping that that might be the case.

BB NOTE: You can read Kendall Harmon's original post here and then listen to the BBC Interview here (the eight-minute interview begins just past the 45 minute-marker.
Posted by Unknown at 8:55 PM

For Heaven's sake, can't this woman answer a question?!?!

... this different way of coming to theological conclusions and not looking alone to bishops to make policy and set decisions.

Well, so much for ++Rowan's comment, "... a major ecclesiological issue, not about some sort of autocratic episcopal privilege but about the understanding in The Episcopal Church of the distinctive charism of bishops as an order and their responsibility for sustaining doctrinal standards. Once again, there seems to be a gap between what some in The Episcopal Church understand about the ministry of bishops and what is held elsewhere in the Communion, and this needs to be addressed."

Dino, what question(s) do you feel she left unanswered?