Click on the letters below. The Episcopal Church has filed an appeal with the Supreme Court of the Commonwealth of Virginia to overturn the rulings of Judge Randy Bellows in the Fairfax Circuit Court. The appeal, though widely expected to be granted, is pending. 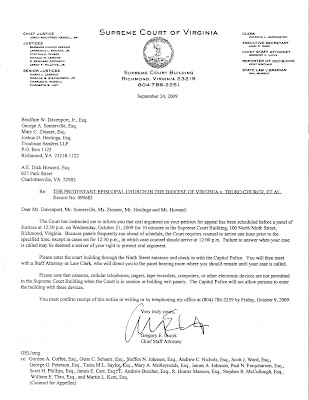 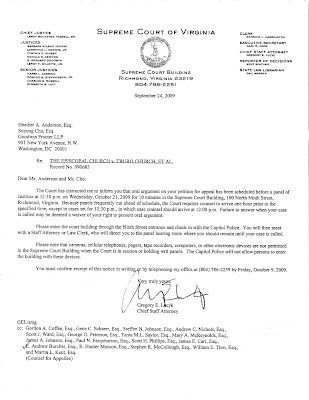 If the appeal is pending, then why is the Supreme Court hearing? I'm confused by your last sentence.

In most civil matters, appeals to the Supreme Court of Virginia are discretionary, which means that the Court must first decide whether to grant the appeal.

So this is oral argument by the petitioners (TEC and the Diocese of Virginia) trying to convince a three-justice panel of the Court to grant their separate appeals. The CANA congregations don't get to argue in person at this point, although they've filed "briefs in opposition to the petitions for appeal" already.

So really, it's the petitions for appeal that are pending. If granted, the appeals will be pending.

When someone wants to file a petition to appeal a circuit court decision, as we have in this case, in addition to the written petition (and responses from the other side), they can also make one oral petition as well. Their can be no response from the other side - so in this case, only The Episcopal Church and the Diocese may make oral arguments before the Supreme Court, there can be no response from the Virginia Churches.

After that the Supreme Court will thenmake their decision, which they are highly expected to do, to take the appeal.

At this point, The Episcopal Church and the Diocese's appeal is still pending. There were something like 40 boxes of official court records sent from the Circuit Court to the Supreme Court. TEC and the Diocese will have this one opportunity to speak to their case, with no response permitted from the Virginia churches. Judge Bellows rulings themselves speak for the churches.