The Sound of Silence: Deja Vu All Over Again?

I do know that there have been recent significant movements on other fronts as well that are quite interesting. Bishop Schori is being forced to clarify her comments and actions at General Convention. Rowan Williams got an eye-full during his "impaired" visit to General Convention. This is a good time to pray. 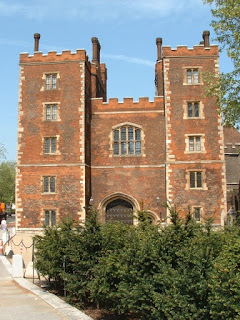 I have had this information for some time, and was never asked to embargo it. Nonetheless, it seemed best to wait until the event was actually in progress. It now is.

Seven diocesan bishops of the Episcopal Church are presently at Lambeth Palace for a brief--but, I'm sure, intense--consultation with the Archbishop of Canterbury. All seven are members of the Communion Partners, and all seven are signatories to the Anaheim Statement.

I have no inside knowledge of the subjects under discussion, but it doesn't require any eavesdropping equipment to figure out that they're talking about how Dr Williams' "two tier/two track" plan might actually get implemented. More specifically, it is a safe bet that each of the seven is interested in what steps a diocese might have to take to remain on Tier/Track One even as TEC per se is assigned (consigned?) to Tier/Track Two.

The Archbishop's schema is going to happen; of that I am more certain than ever. It will happen too quickly and too decisively to suit the ruling party in the Episcopal Church. It is long since past happening too slowly and too subtly to suit those in what had been TEC's conservative wing, and who are now part of the GAFCON-ACNA axis. But the Archbishop has behaved with utter consistency and coherence since the advent of this crisis in 2003, and there is no reason to think he will deviate from that path now. He will never send the Presiding Bishop an email saying, "The tracks have been assigned. You're in #2." He will say something like, "Here's the Anglican Covenant. Churches that adopt it as their own will remain in full communion with the See of Canterbury."

The General Convention, of course, will never do so. In time, the consequences of that decision will be seen in the form of invitations to Primates Meetings that never reach 815, and registration materials for the Anglican Consultative Council that never make it to TEC's chosen delegates. It will not come with a bang. It won't even be a whimper. It will simply be the sound of silence.

Read it all here. Looks like it's time for this:

Wasn't there something about "the neon god they made?"

I have commented on Fr. Martins's post on the Covenant site. I believe that he is worng in assuming that the General Convention won't adopt the Anglican Covenant when it meets in 2012 - we don't even have the final draft - and that he is wrong in thinking that the Archbishop can withold invitations to the Anglican Consultative Council meetings. It is solely within the power of the ACC to decide who is represented and any vote to remove TEC representatives would have to be taken at a meeting where those representatives were voting. A great deal will happen between now and 2012 and it is too soon to make predictions.

Interesting development. My mind goes to the alleged words of Admiral Yamamoto: "I fear all we have done is to awaken a sleeping giant."
815 has stood in open defiance to the greater Anglican Communion for nearly a decade now, and I'm certain that +++Cantuar has a limit to his grace and patience.

Apparently Fr. Weir is either purposefully deaf to the outcry of TEC's leading voices, or he is hopelessly optimistic.

TEC is being led by a large cadre of people who are neither mainstream nor representative. They have the ear of loud and active voices in dioceses, but the majority of the pews do not care for the work and witness of General Convention.

It has been made very clear by the leading detractors in the Executive Committee and elsewhere that TEC does NOT and will NOT want to sign on to a Covenant that means anything. Like most machinations of the last 10 years, TEC's hirelings have played the obfuscation and delay tactics to perfection. This will continue until a new ABC gets installed. If the person is another Carey, then the show is over. TEC loses big time. People are sick of the double talk that comes out of the mouths of false teachers. The latest??:

"We will give permission for some bishops to respond pastorally and use the Prayer Book to marry same gender couples....but we aren't changing the meaning of marriage."

The pure guile of that spin going around shows the utter contempt that the House of Bishops, the PB, the Executive Committee, and their blind supporters hold the truth.

Please. 2012 will not see a meaningful Covenant....just one that liberal dinosaurs like....all the while still avoiding how this Church has been going down in utter disarray.

Andy, you really think ++Rowan is a sleeping giant? I think neither: eyes wide open, riverboat gambler wagering Anglicans, being Anglicans will live with the hand-wringing angst for another 40 years. Seriously, look at South Carolina: their bishops says that the National Church has deconstructed its doctrines of the Trinity, the authority of Scripture, the uniqueness of Christ and human sexuality - and the "Brilliant" and "courageous" leadership decision is to stay!?! - in an organization that has denied its very reason for existence? no. no one sleeping here. and, alas, no giants, either.