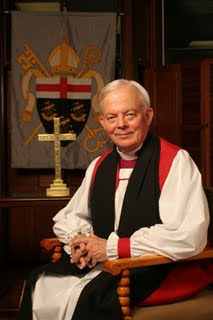 Last Saturday there was a quiet farewell in Richmond to Bishop Peter James Lee, Bishop of Virginia (as opposed to the original festivities planned for the National Cathedral in Washington) as Bishop Lee officially steps down as the bishop of the Diocese of Virginia next week after twenty-five years as the Episcopal Bishop of Virginia.

Episcopal Life's press release reports that while he is leaving Virginia, he's still putting retirement off for now. "Lee was recently elected chairman of the board of trustees of the Church Pension Fund. He is chairman of the Friends of Canterbury Cathedral in the United States, which encourages support for the mother church of the Anglican Communion, and is also a member of the Compass Rose Society, an international group that supports special ministries of the Archbishop of Canterbury and of the Anglican Communion Office."

"Beginning October 1," the press release states, "Lee will continue his ministry in the Episcopal Church as interim dean of Grace Cathedral in San Francisco, the largest Episcopal cathedral on the West Coast." Perhaps unsurprisingly, all things considered, there is no mention of the massive litigation now up for almost-certain appeal in the Supreme Court of the Commonwealth of Virginia or what could have been one of his most extraordinary achievements, overseeing the drafting of the Diocese of Virginia's Protocol for Departing Congregations.

I am sad, actually, very sad. I have some warm memories of him from many years ago, back before he was courted to be a nominee for Presiding Bishop in 1997 and years before General Convention 2003. In fact, one of my favorite Bishop Lee stories was when he once came to Truro for confirmations around 1990 and a reception was held in his honor in the Undercroft after the service.

Folks were milling about, drinking coffee and munching on sweets when suddenly someone droped an entire cup of coffee on the floor, right at Bishop Lee's feet. It splattered everywhere.

The parish secretaries were horrified and took off in several directions to get enough paper towels to clean the entire Undercroft. When they returned with bundles of towels in hand, they found Bishop Lee down on the floor on his hands and knees mopping up the spilled coffee.

"Bishop Lee!" one of the Truro parish secretaries nearly shouted at him in some kind of blend of surprise and horror. "What on earth are you doing!"

Bishop Lee straightened up, coffee soaked paper towels in hand, and smiled. "Once a deacon," he said to the secretary as he put the towels in the waste basket, "always a deacon."

As we pause tonight and ponder the coming week, it saddens me to no end that so much in the past six years has been lost. But, even with that being said, one never gives up hope, not because any of us have all the answers, hardly, but because we serve Someone who does, Someone who serves always, in season and out, as Bishop Lee demonstrated in his own way on that Sunday afternoon all those years ago.

So here's a dedication to my first bishop, the one who received me into The Episcopal Church. I'll never forget his witness that day, though so much has passed since, no, I choose to not forget, for in the end it is Christ whom we serve, it is Christ who serves.

That was very beautiful. Thank you for sharing.

With all of that said, I wonder what business he has becoming the dean of one of the most sacriligeous cathedrals in TEC (Grace, S.F.)? With their SSBs, the altars to other religions, etc., I wonder what Christian would not be offended. Are we that far gone?

Interesting that the Word Verification is....

I had a lot to say about Peter Lee but it was very negative. I will pray for his soul instead.

BB, your witness of sorrow, not bitter, for those whom there is profound relational brokenness continues to piece my heart. Bless you.


Happy times to deep disappointment. It is so important to finish well and is so frustrating that he actually was working towards a better path, but gave in to pressures.

Yet, as instructed by St Paul, may the Lord richly bless him in the next phase.

May his fight to recover Episcopal property be continued vigorously, relentlessly, and victoriously.