Ground Control to Major Tom: U2 at FedEx Field 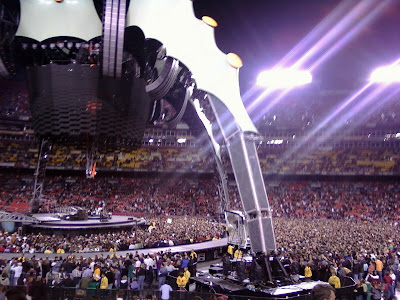 As those of you who follow Twitter and Facebook all ready know, I decided at the last minute to go see U2 at FedEx Field outside DC tonight. Friends who know me well could not believe I'd miss the concert and kept at it until I came to my senses. Very glad they did. While I have a rather odd "relationship" with U2 (I'd describe it as having four extra siblings), I enjoyed it very much. There were parts that were brilliant, but there were other parts that are so darn annoying (was there a cause tonight that wasn't mentioned?), it was an amazing achievement to turn the 1970s "Stadium Rock" into something far more intimate, no small achievement.

I have to admit, I've come to a place with them that I wish they'd leave the theatrics (light shows and high and mighty Causes) at home for once and just do the music. Of course, then they'd probably cease being U2. The music is amazing and why Bono can't stop talking continues to escape me (except for perhaps to make up Dylan who speaks, like, never). Of course, if Bono stopped talking he'd cease being Bono. I also wanted to remind him that Republicans are fans of U2 as well and just as I was about to do a shout-out, he name checks George W. Bush and dedicates "One" to him. Great timing, Bono.

I'm still working on getting into the new album, though I love Magnificent which I played a lot this summer in Anaheim. I also wish that Bono would channel Baez less and Dylan more. The music frankly is far more powerful than all the incessant slogans which just were all over the place tonight. The heart wrenching Causes were as plentiful as the light theatrics and so somewhat all were diminished in the end, not what I think would be his intention. However, when the video of the struggle of the brave souls in the streets of Iran went up on the screen it was clear that the young Muslim couple standing next to me were clearly, clearly moved and as far as the Causes were concerned, it was that moment, right there in the stands that hit me the most. It was clear that this couple were living inside what we were seeing on the screen. Even in the midst of the bedlam, you could see the joy of connection on their faces. 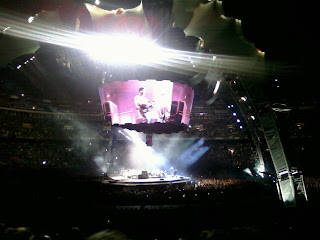 "The Claw" (which did remind me of "The Claw" in Toy Story) was an extraordinary achievement in creative engineering. It just took light shows to a whole other level. At times "The Claw" looked more like U2's private cathedral than David Bowie's Space Ship. But it was darn cool, with bridges that moved so that the band could easily leave the center stage and get closer to the audience, something all four of the members of U2 took advantage of.

The concert was at FedEx Field and I discovered why the Redskins don't win. They are in the wrong stadium. This stadium - which was actually built by Jack Kent Cook - was built by the former owner to be the Redskins stadium. But you couldn't tell that by looking at the field. The team promoted there was FedEx and it's so excessive that it might behoove Danny Snyder to just rename the Redkins the "Fedex Fielders." At least then they might have a stadium devoted to a football team. That stadium has no heart - it's just one giant advertisement.

It was rather cool, though, when the President of Rwanda came in and sat down two rows in front of me. That was pretty cool. 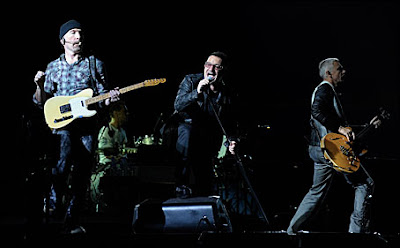 There was most-definitely a 1970s flavor to the music and show tonight, hearkening back not only to the heyday of Stadium Rock, but also to the themes and ambitions of those days. It became clear that Bono feels strongly that if a country can land someone on the moon, surely then we can solve world poverty. And have a great time doing it.

Here are a few highlights:

Greek, all Greek to me. Just not my cup of tea. Sorry, probably my loss.

It has been a long time since a band inspired me to RFK or the Cap Center (just to show you how long it has been), but I'm overjoyed for you that you decided to go.

BB, I'm glad you went. Please forgive my interruption after church the other day - I just wnated to make sure you had actually attended! We are agreed that "Amazing Grace" followed by "Streets" was the best part of the show - they did the same thing in Charlottesville. -- BJM3