Breaking News: St. Andrew's Mt. Pleasant in the Diocese of South Carolina begins discernment on separating from The Episcopal Church 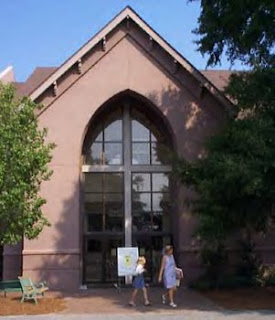 StandFirm has the story. Check it out here. Stay tuned for updates.

Here is the letter that was "signed by every one of the church's senior wardens going back to 1989," reports SF. St. Andrew's rector, Steve Wood, was one of the original candidates for Bishop of South Carolina and a deputy at the General Convention this summer in Anaheim. The letter reads:

To our Dear Sisters and Brothers in Christ at St. Andrew’s:

For many years now, the clergy and lay leadership of St. Andrew’s Church have wrestled with the increasing tension between St. Andrew’s and The Episcopal Church caused by the decisions of The Episcopal Church to "walk apart" from both the biblical faith and the Anglican Communion. Throughout this time we have sought the Lord desiring to be prayerful and graceful in our response to the challenges presented to us by the actions of The Episcopal Church. And so in the late 1990’s we began a process of differentiation in which we took steps that have included the cessation of funding for the national church, and, more recently recognizing that we are in a state of broken communion with The Episcopal Church. The Vestry has continually sought to discern the Lord’s will for our place within the Anglican Communion, as well as our expressed relationship to The Episcopal Church. Twice in August the Vestry met for prayer, confession, repentance and conversation about this matter. The conclusion of this long, prayerful process is the unanimous sense that the entire parish of St. Andrew’s, Mt. Pleasant be invited into an intentional, parish-wide discernment process called, "40 Days of Discernment." Joining the Vestry in this invitation are the Staff and former Senior Wardens of the parish dating back to 1989.

What is the problem? The most fundamental issue in conflict within The Episcopal Church is the gospel message itself. St. Paul spoke repeatedly of faithfully passing on that which he received. Great care was taken to ensure that the gospel message would be entrusted to those who would not add to nor subtract from The Story. In the three most recent General Conventions of The Episcopal Church (2003, 2006, 2009) the gospel message of a loving Father who seeks to draw all people unto Himself through the cross of His Son has been replaced. Offered instead is a therapeutic gospel which refuses to acknowledge the falleness of our nature and our deep need for spiritual and moral transformation. While this gospel appears kind in its inclusivity, it nevertheless leaves us unchanged and enslaved to our sins and is therefore unspeakably cruel.

Addressing the actions of The Episcopal Church Bishop Mark Lawrence spoke about the "core doctrines of our faith being systematically deconstructed." He went onto say that "we face a multitude of false teachings" and specifically noted the deconstruction of the doctrines of The Trinity, The Uniqueness of Christ, the matter of scriptural authority and our baptismal theology. What has become abundantly clear is that we now have two entirely different religions trying to exist under the same name. Sadly, The Episcopal Church consistently revealed at General Convention no longer remotely resembles The Episcopal Church some of us once knew and cherished. And, the contentiousness within The Episcopal Church over these matters has deeply wounded our gospel witness confusing many who seek a living, vital, personal relationship with the Living God.

"And so in the late 1990’s we began a process of differentiation in which we took steps that have included the cessation of funding for the national church,"
I am no longer a member of TEC nor am I an apologist. It seems to me however that if a church calls itself "Episcopal" it should also be willing to support the organization with funding. What has the church done with the money it has withheld from TEC? Where your treasure is there will be your heart also.
"more recently recognizing that we are in a state of broken communion with The Episcopal Church." OK, so it's time to leave.

Dale, I'm a member of St. Andrew's. The money was redirected into a number of places, most notably the mission partners - locally and internationally - that we have. St. Andrew's invested over $1,000,000 in mission/evangelism/compassionate care ministries last year alone.

The link to the original article is broken.
http://www.standfirminfaith.com/?/sf/page/24643

I am heartened that the church would redirect the money and not spend the "windfall" on itself. Kudos to the church!

Will the bishop of South Carolina sue?

This is a somewhat different situation than we have seen in other areas of the country (e.g., Virginia and California). Here we have a diocese that is taking a very traditional position and this parish is nonetheless trying to extricate itself from the evil coils of the Episcopal Church, thereby undermining the stand of the Diocesan Bishop. We need people like the Bishop of South Carolina in the church. I would hope the parishioners at St. Andrews would give him deference and maneuvering room. In any event, if they decide to leave (and the Forty Days of Discernment process is pre-cooked to support leaving), I would hope that Bishop Lawrence would act decisively to maintain diocesan control of the property, particularly if there are any who, for whatever reason, determine to remain.

Sounds like an attempt by the folks who happen to passing through in this generation to take control away from those who have gone before and those who will come after. I pray either they or the Bishop see this non-gracious, prideful behavior for what it is and that the Church remains in the hands of the faithful Episcopalians in the Church/diocese/area.

St. Andrew's also has a precedent to overcome - the Pawley's Island case - and I would guess they lose in court. If Bishop Lawrence doesn't sue, the PB will. St. Andrew's "40 days of discernment" better include getting some leased space.

My money is on a negotiated settlement, as has been done elsewhere if a diocesan is sympathetic to the seceding congregation. This departure may make life easier for both parties. Certainly, as Anonymous says, SC case law, in the Pawleys Island suit and in an earlier suit over a seceding Presbytarian congregation, is entirely on the side of the "Mother" church, though ownership of part of the Pawleys Island property is complicated by a pre-Revolutionary deed of gift.