A New Dylan Album for Christmas? 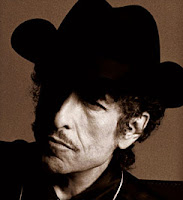 Isis magazine was the first to report rumors of a new Dylan album in the works for Christmas. Reuters followed the rumors up, correctly reporting that Dylan never renounced either being Jewish or being a Christian. The songs however seem to be cultural Christmas songs and was in fact in today's national news report on the top of the hour on WTOP. So far no official statement either confirming or denying the rumor, but it does seem like a rather odd thing for him to do.

Billboard is now confirming the existence of the album, Reuters is reporting. Rumors are the songs recorded include "Here Comes Santa Claus," the carol "O Little Town of Bethlehem," "Must Be Santa," and "I'll be Home for Christmas." Just the thought of it is enough to wonder if he's been hanging with the grandkids and just wants to give them a present.

"At first glance it may sound bizarre, but I don't think Dylan cares much about what his detractors might make of it," said Scott Marshall, author of God and Bob Dylan: A Spiritual Life. "He's both never renounced being Jewish or renounced his experience with Jesus some three decades ago."

Sounds like Santa's made the cut as well. Of course, we still remember when he read Twas the Night Before Christmas on his Theme Time Radio Hour. That alone would be worth the price of a CD. Stay tuned to see if it's real or if it's memorex. Ho, ho, ho.

In fact, here is Bob Dylan reading Twas the Night Before Christmas. Might be just what we need now that the heat wave is hitting us. Enjoy!