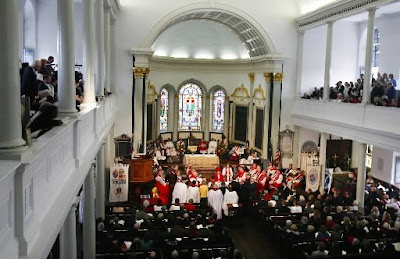 A must-read here. One part particular section stands out to us here at the Cafe:

The Archbishop has expressed in section 25 of “Communion, Covenant and our Anglican Future” his strong hope that “elements” [dioceses?] will adopt the Covenant. I believe we ought to sign on to the Ridley Draft of the Covenant as it presently stands in all four sections. (If it means we need to withdraw from a lawsuit we withdraw from a lawsuit). Therefore we need to begin the process of studying the Ridley Draft in every deanery and parish and be prepared to vote on it either in the special convention in October or, if that’s too ambitious a time frame, no later than our Annual Diocesan Convention in March 2010.

You need to know that the Anglican Communion Development Committee has already had its first meeting and will begin this fall to vigorously establish relationships with a broad array of Provinces across the Communion. You have heard me speak of this often, including during my Bishop’s Address last March. This still strikes me as one of the most important activities we should pursue. We can work with several of the Provinces within the Communion, and, if they are so inclined to partner with us, we should work with GAFCON and ACNA from within TEC to further gospel initiatives.

Do note the willingness, for the sake of Christian unity, to stand down from the lawsuits that have been underway for quite a while between the Diocese of South Carolina and AMiA parishes. It is an example of Lincoln's own prayer for the revival of the south, "with malice towards none, with charity toward all," especially when it comes to those in ACNA and those outside the gates. May it be so, though it seems to have taken an Anglican Covenant to make it so, so be it. The open door of entering into indeed what the Archbishop of Canterbury prayed, that we would find common mission when we do have common mission indeed between the ACNA and the Diocese of South Carolina - is there courage to say this is so? It was right there in front of all to see at General Convention, if one had eyes to see it.

Read it all here - and indeed, all our prayers do go out to the people of the Episcopal Diocese of South Carolina. What does concern us, though, at this late hour is that the talk appears to be ten, fifteen years too late. And ten, fifteen years ago this type of talk was given, statements made, statements signed. The work is all ready done. The sentiments are exemplary, no doubt, and welcomed. But the reality on the ground is something else. This talk was focused on the clergy of the Diocese of South Carolina - but it is the laity who hold the purse.

Photo from the consecration of Bishop Mark Lawrence, January 2008.
Posted by Unknown at 9:21 PM

Baby Blue - exactly: 10-15 years too late. He was eloquent, he was passionate, he was also very clever. He called for no clear action - "begin to withdraw" - but not from TEC, only from "those bodies" within TEC who have acceeded to certain actions. Funny, I thought TEC itself had acceeded.
I cannot imagine that the right-wing of this diocese was pleased. My Rector said Wood+, Zadig+ and several others had their heads in their hands looking like they needed Tylenol. He also said that several gave verbal indication through the kinds of questions asked that this call to wait didn't play well.
We shall see. I don't know, personally, any of the players involved. I feel, though, like I'm on a slow train to a spiritual Auschwitz.

I don't want my name associated with Stand Firm any longer.

I guess to keep the illusion that they have a lot of readers they won't remove anyone from their list, and it is impossible to log out.

IF YOU WANT TO BE "REMOVED"

We occasionally receive requests from people wanting to be "removed from the list." If you have emailed us with this request, please note:

We do not delete accounts from our system, because doing so also deletes all comments you've made. This causes problems due to the way comments are numbered and referred to by other members.

If you want to stop receiving emails from us, or otherwise change your incoming email settings, please follow the next set of instructions. ^back to top^

Anon, I think you can arrange not to receive e-mails any longer from SF (but perhaps not), but I am not sure what you mean by logged out. I hesitate to ask what caused you to feel so strongly that you'd head over to the Cafe for a couple of shots of Old Ogden's Fire Whiskey - if you haven't ordered it yet, I'd suggest you order two.

For the record, the SF gang are tireless in their diligence to get their stories right and to say sorry when it goes awry (I've seen that with my own eyes), but they are human too.

Bishop Lawrence trying to slither into Secession, knowing that under SC law he'll lose pretty-well everything should he have the guts to try it openly.

Fr Hagger over at "Of Course I Must Be Wrong" had a moment of clarity today and posted this take on the SC diocesan seal, a reference, I assume, to Lawrence's March 8, 2007 promise, made after his initial election had been rejected, that "I will make the vows of conformity as written in the Book of Common Prayer and the Constitution & Canons, (III.11.8). I will heartily make the vows conforming '...to the doctrine, discipline, and worship' of the Episcopal Church, as well as the trustworthiness of the Holy Scriptures. So to put it as clearly as I can, my intention is to remain in The Episcopal Church."

If you want to be dropped from SF ask what's on the menu at a prayer breakfast in Plano and they will ban you forever.

I guess I don't understand, Anon. SF does not send unsolicited messages and my screen name shows up only when I choose to post.

If you're objecting to your name appearing in old posts, then you'd be asking them to pretend you never posted the comments you made. The simplest way to not be associated is to not visit the site.

When you are there, go to the account page and then to view subscriptions. If you delete all of the subscriptions, you no longer get e-mails from what you sent.

Then, go to e-mail settings and un-click your choices. Then log out. That should do all of it, if not most.

I think the ticked-off had-it was-SFer Anon has gone over to Hagrid's table, for isn't that the two of them we hear harmonizing a snail's pace rendition of Simon & Garfunkle's Sounds of Silence at the table by the door?

Or perhaps they just wish they were still at Woodstock.

If you want to be free of Stand Firm, just disagree publicly with one of the chief ayatollahs there and you will be banned instantly.

Ah, Anon, it sounds like the dog days of summer is upon us. I see you sitting down there at the end of the bar with your pint and squinting fiercely.