MICHAEL MEDVED REPORTS: The controversial new leader of the Episcopal Church in the United States provided a prime example of these alienating attitudes in a startling interview in the New York Times Magazine on November 19th with Deborah Solomon. When Solomon asked about the current numbers of Episcopalians, for instance, Bishop Jefferts Schori took it as a point of pride that her church experienced declining membership.

Q: How many members of the Episcopal Church are there in this country?

A: About 2.2 million. It used to be larger percentagewise, but Episcopalians tend to be better educated and tend to reproduce at lower rates than other denominations.

In other words, it’s just those uneducated, unsophisticated Evangelicals and Catholics and Mormons and Orthodox Jews who are bothering with the messy, dirty work of producing and raising kids. Naturally, the Presiding Bishop defends the low Episcopal birthrate as a sign of enlightenment: 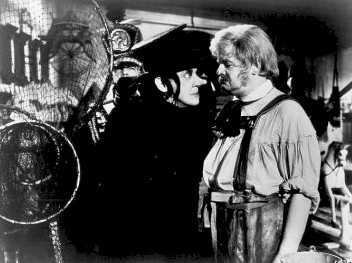 Q: Episcopalians aren’t interested in replenishing their ranks by having children?

A: No. It’s probably the opposite. We encourage people to pay attention to the stewardship of the earth, and not use more than their portion.

BB NOTE: When I was a kid I was scared to death of this guy (see picture of guy on the far left). Wonder if he was an Episcopalian too?

Q: As a scientist with a Ph.D., what do you make of the Christian fundamentalists who say the earth was created in six days and dismiss evolution as a lot of bunk?

A: I think it’s a horrendous misunderstanding of both science and active faith tradition…

Q: Pope Benedict…became embroiled in controversy this fall after suggesting that Muslims have a history of violence.

A: So do Christians! They have a terrible history… I think Muslims are poorly understood by the West, and it is easy to latch onto that which we do not understand and demonize it.

Note that when the good Bishop speaks of the shameful record of violence by Christians, she says “they have a terrible history” – not we. In other words, she instinctively excludes herself when she talks of Christian tradition.

BB NOTE: Well, that just about it says it all.

Finally, Bishop Jefferts Schori casually dismisses the familial and marital norms that most believers embrace and defend as the very essence of Judeo-Christian faith. Instead of traditional pride in a husband and wife building a home together, making heroic efforts and even significant sacrifices to share a life, the Bishop happily announces that she and her spouse occupy opposite ends of the continent.

Q: You were previously bishop of Nevada, but your new position requires you to live in New York City. Do you and your husband like it here?

A: He is actually in Nevada. He is a retired mathematician. He will be here in New York when it makes sense.

In other words, it doesn’t “make sense” for a retired mathematician to be at his wife’s side when she takes on the leadership of one of the nation’s most significant Christian denominations? It doesn’t make sense for the first female Bishop to head this denomination to try to model marital togetherness?
Posted by Unknown at 10:27 AM

[*Sigh*] Well, if the executive power stance photo doesn't illistrate a lot, if the basic insult on the largest Christian denomination in the US & World didn't say a lot, I just love her stewardship answer.

Maybe 815 read my BB comment about trying to work the media as primary tactic. However there must have been budget cuts and they've not hired any test marketing groups (& their how close to Madison Ave?).

Most readers probably have no clue what about concept of "carrying capacity." Environmentalist have focused most of their efforts on emissions and climate change as the main media message. I'd imagine in the ranks of her supporters the concept is not widely known. The two answers together really exasperates the insult. Her stewardship comment really show just how much she's an elitist.

I believe other boards have explored the insults to Catholics in depth. Did she have to shove her foot half way down her throat this week? I'm sure Rowan William was just thrilled with the PB, she really helped his visit [as the sarcasm drips to the floor].

Got to love her Freudian slip of "they (Christians)."

Finally, kudos to BB for taking the high road about her husband not being with her in NYC. There is another implication that could be made & you didn't go there.

One general theme every other blog I've seen states, everyone pointing that how the prayer was for clarity and the last three weeks -- watch what you pray for or you might just get it. We certainly have clarity!

I agree with most of BB's commentary on the NY Times interview, except I must take exception to "one of the nation’s most significant Christian denominations?" Back in the days of PECUSA, even in the days of ECUSA, the Episcopal Church was a significant denomination. Now in the era of TEC, they're fast heading towards "sect" status. How much lower must the number of adherants go before TEC is written of as a sect (and a rather looney one at that.) And what does that mean in practical terms? Well, loss of access to significant grant funding, for one. Loss of respect, perhaps?