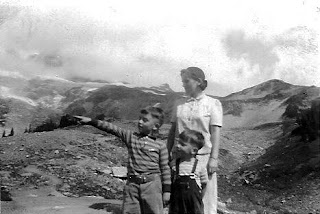 On the morning of December 7, 1941, as the bombing was underway, my grandmother Edith Ailes drove my grandfather, John W. Ailes III, to the Honolulu YMCA where he was to then go to his ship, the USS Honolulu moored at the Naval Station at Pearl Harbor.

In the car were also my dad, age eight, and my Uncle Bob, who was six. She said goodbye to my grandfather outside the YMCA and then, as the bombing continued, drove up to the hills, to Tantalus Drive which overlooks the eastern side of Oahu and to a cousin's house where she and her boys watched the unfolding drama as World War II began.

My grandmother did not know if she would ever see her husband again, as down below ships were sinking with their crews still on board, ships like the USS Arizona which was hit four times, as well as others that were moored around Ford Island in the center of Pearl Harbor. The USS Arizona is still there at the bottom of the harbor, with her crew entombed inside her.

The Japanese bombed for two hours and in those two hours, 2,500 people were killed, 1,000 more were wounded, and 18 ships and 300 planes were were damaged or destroyed. My grandfather and his fellow crewmen aboard the USS Honolulu were able to get their ship out of the harbor and safely out to sea.

Though Granddaddy survived, he was now at war and was forced to send Grandma Edith and his sons back to the mainland without him. He would be gone for the rest of the war.