The BBC focuses on William Byrd 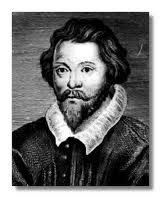 The BBC offers a fascinating discussion on the English composer William Byrd (c1540-1623) here.  The Rev Richard Coles hosts the discussion on how William Byrd survived as a recusant in Elizabethan England. While renowned for great Elizabethan compositions and Anglican sacred music, he devoted much of his life to composing "underground" Roman Catholic Masses even while still honored by the Protestant Queen Elizabeth I.

Today he is one of the all-time greats in Anglican/Episcopal liturgical music. Listen to the BBC radio show, "Twenty Minutes: William Byrd and Catholicism," here.  The BBC has more on Byrd here.

How dreary! I much prefer drums and guitars. How can anyone attend a Worship Meeting without a band for the Calvinist songs?

I find it unlikely u are a Baptist