Great news!  The Rev'd Dr. Eric Menees has been elected Bishop Coadjutor of the Diocese of San Joaquin.  He will follow the Rt. Rev'd John-David Schofield who has served as Bishop of San Joaquin since 1988.  Here is a video of an excellent teaching he did recently from Anglican TV:

Here is the announcement of the election:

RE: THE ELECTION OF THE BISHOP COADJUTOR The Standing Committee, in accordance with Title I, Canon I, Sec. 1.04 (Canons of the Diocese of San Joaquin); Article X(5) (ACNA Constitution); and Title III, Canon 8, Sec. 1 (Canons of the ACNA), is pleased to announce on behalf of special convention convened in Fresno, California, at the Anglican Cathedral of St James, Saturday, May 14, 2011, the election of The Rev?d Dr. Eric Menees on the second ballot, as Bishop Coadjutor-elect of the Anglican Diocese of San Joaquin. 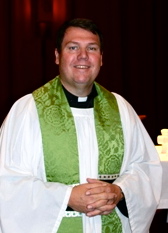 The Rev. Dr. Eric Menees currently serves as the Rector of the Anglican Church of the Resurrection in San Marcos, CA. A graduate of the General Theological Seminary, Fr. Menees received his Doctor of Ministry from Seabury Western in 2006.

After he graduated from seminary Fr. Menees was ordained in the Episcopal Diocese of Los Angeles and subsequently served as the Deacon/Priest in Charge of the Church of Epiphany and the Associate Rector of the Church of the Messiah, both of which were Spanish language ministries.

The Rev. Menees served as the Chaplain to the Bishop’s School in La Jolla prior to becoming Rector of Grace Episcopal Church in San Marcos, CA. For reasons of conscience, the Rev. Menees left Grace Episcopal and founded the Anglican Church of the Resurrection in 2006. He is a vowed Third Order Franciscan.

The Rev. Menees is married to Florence Guadalupe Mira-Menees and has a daughter, Milagro, aged 17 and a son, Sebastian, aged 10.


The Rev. Dr. Eric Menees is the new bishop of the Anglican Diocese of San Joaquin, following his election Saturday by clergy and lay delegates at a special convention at St. James Cathedral in east-central Fresno.

Menees, rector of the Anglican Church of the Resurrection in San Marcos in Southern California, will replace Bishop John-David Schofield, who has announced plans to retire in October.

The Rev. Van McCalister, assistant to the dean at St. James, said delegates cast two ballots before a majority vote for one candidate was reached. The other candidates were the Very Rev. Carlos Raines, dean of St. James Cathedral; and the Rev. Dr. Ronald Jackson, chaplain and tutor at Trinity College in Bristol, England.

The final vote for Menees was 120 of the 168 clergy and lay delegates. Separate majority votes were required among the clergy delegates and lay representatives.

Menees was ordained in the Episcopal Diocese of Los Angeles. He served in Spanish-language ministries and as the chaplain of the Bishop's School in La Jolla. He was rector of Grace Episcopal Church in San Marcos before founding the Anglican Church of the Resurrection in 2006.

Menees and his wife, Florence Mira-Menees, have a 17-year-old daughter and a 10-year-old son.

McCalister said Menees will be consecrated at a service in the larger People's Church in September and enthroned in late October, which coincides with Schofield's retirement.

Schofield was elected bishop in 1988. In 2007, Schofield helped lead a movement for the diocese to secede from the U.S. Episcopal Church over debate about same-sex blessings, consecration of a partnered gay priest and how to interpret the Bible over such issues.

The Anglican Diocese of San Joaquin extends from Elk Grove south to Lancaster, and from Hollister east to Henderson, Nev.

I am praying for him and his family.