That this Synod:
“(a) recognise and affirm the desire of those who have formed the Anglican Church in North America to remain within the Anglican family;
(b) acknowledge that this aspiration, in respect both of relations with the Church of England and membership of the Anglican Communion, raises issues which the relevant authorities of each need to explore further; and
(c) invite the Archbishops to report further to the Synod in 2011.”. 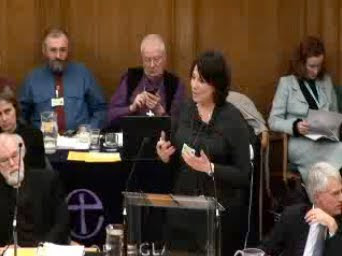 Recognize that there are faithful Anglican Christians serving in the ACNA 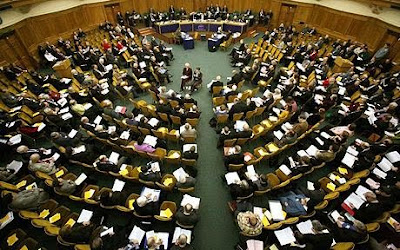 The live stream for the Church of England Synod is below or here. Deliberations will continue at 9:30 a.m. (EST).

"That this Synod express the desire that the Church of England be in
communion with the Anglican Church in North America.‟

TUESDAY QUOTE of the DAY:

"What are the vehicles for sharing perspectives, communicating protest, yes, even, negotiating distance or separation, that might spare us a worsening of the situation and the further reduction of Christian relationship to vicious polemic and stony-faced litigation?"
Rowan Williams
Archbishop of Canterbury

Right on target - that is the real question. The Virginia Protocol was one of those vehicles. Even now, it's not too late.Ruth Gledhill of the Times twitters, "Calming Vivaldi playing #synod before ++Rowan steps up to speak. Colleague suggests is on same principle of classical music at Brixton tube."

We have learned that first up will be the presidential address from the Archbishop of Canterbury.

He begins by stating that the governmental must recognize that there are boundaries between the government and the religious community. He is also addressing that issue of assisted suicide is a moral mistake and upsetting the balance of freedoms, and the freedom of vulnerable people.

The difficult issue - certain decisions made by some provinces that fellowship is strained or shattered and trust is destroyed. What are the vehicles to negotiate to spare us vicious polemic and stoney faced legislation? There may be different levels of relationship by those claiming the name of Anglican. But without a change of heart it may be a necessary.

He then pleads for the Covenant. Christian freedom is freedom from isolation, from sin and competing self interest. To be free is to be free for relationship, with the Holy Spirit carrying that gift from heart to heart. It's not simply of balancing liberties, but going to another level of thinking about liberty and not to thin - not unity above integrity, but that unity is how we attain Christian integrity. The challenges of the crisis is how we shape our councils and and decision making and not just pleas for minority to majority, how will the sacrifices of me or those like me to the sanctification of others. Sometimes that means restraint in the communion but that restraint must engage with others in cases of tension.

How do we go on learning from one another. We need to look for resolution that continues liberty and unity in some ways in their own terms. People have a claim to be heard in their own terms. We have to make difficult judgements - how to grant freedom to anyone to anywhere will contribute to each other's holiness.

I can't see everything at once. What is in front of me is not just the surface, seeing in three-dimension means we have to take time and not seek solutions that do to much all at once. Those structures may include distance. What will they make possible if used creatively over time. What future reconciliations may have in the future.

The other we meet is the person of who he or she is not what we imagine them to be.

(BB NOTE: I have learned this profound lesson in my engagement in the Anglican Cathedral in SL)

He positively name checks both The Episcopal Church and the ACNA in the same sentence.

He speaks positively of the Church of Uganda and their work of ministry. Thank you, Rowan.

Not how we win the conflict, but we have to give to our neighbor in sanctification in Christ's name and power. Balancing costs and restraints in order to keep life moving around the body. It will deepen our desire to be fed and nurtured by each other which will deepen the alarm of being separated from one another. 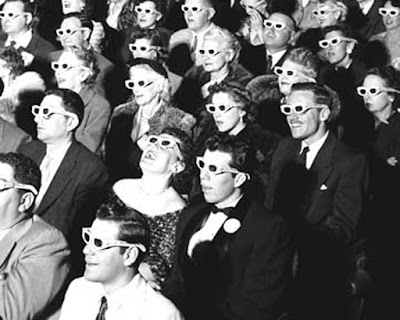 UPDATE: Rowan Williams address is here (and no, that's not a recent picture of General Synod).


"The freedom claimed, for example, by the Episcopal Church to ordain a partnered homosexual bishop is, simply as a matter of fact, something that has a devastating impact on the freedom of, say, the Malaysian Christian to proclaim the faith without being cast as an enemy of public morality and risking both credibility and personal safety."

"The Anglican Covenant has been attacked in some quarters for trying to create an executive power and for seeking to create means of exclusion. This is wholly mistaken. There is no supreme court envisaged, and the constitutional liberties of each province are explicitly safeguarded. But the difficult issue that we cannot simply ignore is this. Certain decisions made by some provinces impact so heavily on the conscience and mission of others that fellowship is strained or shattered and trust destroyed. The present effect of this is chaos – local schisms, outside interventions, all the unedifying stuff you will be hearing about (from both sides) in the debate on Lorna Ashworth’s motion. So what are the vehicles for sharing perspectives, communicating protest, yes, even, negotiating distance or separation, that might spare us a worsening of the situation and the further reduction of Christian relationship to vicious polemic and stony-faced litigation? As I have said before, it may be that the Covenant creates a situation in which there are different levels of relationship between those claiming the name of Anglican. I don’t at all want or relish this, but suspect that, without a major change of heart all round, it may be an unavoidable aspect of limiting the damage we are already doing to ourselves. I make no apology, though, for pleading that we try, through the Covenant, to discover an ecclesial fellowship in which we trust each other to act for our good – an essential feature of anything that might be called a theology of the Body of Christ."

"Christian freedom as St Paul spells it out is always freedom from isolation – from the isolation of sin, separating us from God, and the isolation of competing self-interest that divides us from each other. To be free is to be free for relation; free to contribute what is given to us into the life of the neighbour, for the sake of their formation in Christ’s likeness, with the Holy Spirit carrying that gift from heart to heart and life to life. Fullness of freedom for each of us is in contributing to the sanctification of the neighbour. It is never simply a matter of balancing liberties, but of going to another level of thinking about liberty. And the ‘purity’ of the body of Christ is not to be thought of apart from this work. It is not to put unity above integrity, but to see that unity in this active and sometimes critical sense is how we attain to Christian integrity."

"The challenges of our local and global Anglican crises have to do with how this shapes our councils and decision-making. It is not a simple plea for the sacrifice of the minority to the majority. But it does mean repeatedly asking how the liberty secured for me or for those like me will actively serve the sanctification of the rest."


"Sometimes that may entail restraint – as I believe it does and should in the context of the Communion – though that restraint is empty and even oppressive if it then refuses to engage with those who have accepted restraint for the sake of fellowship."

"Whatever we decide, we need to look for a resolution that allows some measure of continuing dignity and indeed liberty to all – in something like their own terms."

Peter Ould has covered an interesting exchange regarding the Church of England's official doctrine on sexual practices. Peter writes regarding an exchange between the Archbishop John Sentamu, Archbishop of York and President of the Archbishop's Council and questions from the floor.

Suddenly Sentamu moved from diplomat to diplomat with a conservative agenda. No, he replied, the stance hasn’t changed. The Church believes that sexual practice should only take place within marriage of a man and a woman. All Issues in Human Sexuality does is say that laity who don’t hold to that standard will still be welcomed into our congregations.

And there you had it. In one blow Sentamu affirmed the conservative stance, confirmed (as President of the Archbishop’s Council) that it was still the official position of the Church of England and signalled very clearly that there was no intention to change that doctrinal stance.

"That this Synod express the desire that the Church of England be in
communion with the Anglican Church in North America.‟

Blogger Peter Ould has continued with some thoughts on the Archbishop of Canterbury's address here which are worth pondering. I think it is more Romans 6 and I can embrace that. He does take pains to reflect the Church in Uganda in a positive light and chooses an example from The Episcopal Church that I can also embrace. He chose his examples wisely and even cast a positive light on ACNA.

On Wednesday, there wil be an important vote in London on whether the Brits will side with a nascent would-be 39th North American Anglican province that has split with the U.S. Episcopal Church.

The General Synod, the governing body for the 27-million-member Church of England (on paper that's who belongs but real attendance is only a few million per Sunday) will vote whether to align themselves with the 100,000-member Anglican Church in North America (ACNA).

Read the rest of Julia Duin's post here. I must say, I am not in favor of the idea that ACNA is to "supplant" TEC, not by a long shot. The Episcopal Church itself will need to decide what it's own future is in the Anglican Communion. I happen to agree with Rowan Williams that we do need each other, but how we get to the place of unity is key and separation right now seems to be the healthiest alternative. That being said, this is not divorce. We need some space and some creative thinking from the next generation of leaders on how we may find ways to share common ministry. To continue as we have for the last thirty years though has brought us toxic and broken relationships. The Diocese of Virginia's Reconciliation Commission recognized the reality on the ground in its landmark 2005 report which you can still read here.

I embrace Rowan Williams view that we do need to look for the best in one another if we can - but space to do that is necessary. Therefore, I do not support a view that ACNA should or would "supplant" TEC, but that we would continue to find ways to build bridges together.

Even the Archbishop of Canterbury recognizes this, as we now see in his presidential address today when he asked, "What are the vehicles for sharing perspectives, communicating protest, yes, even, negotiating distance or separation, that might spare us a worsening of the situation and the further reduction of Christian relationship to vicious polemic and stony-faced litigation?"

This is my question as well.

bb
"I must say, I am not in favor of the idea that ACNA is to "supplant" TEC, not by a long shot." If the ACNA supplants TEC, which may or may not include recognition by the CoE, it will be because the majority of Provinces believe they can no longer be in fellowship with TEC. The fate of TEC is in its own hands.