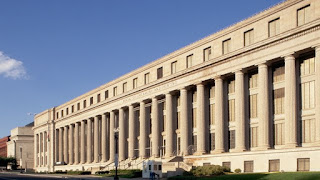 "The government calmly goes on printing these scraps of paper, because, if it stopped, that would be the end of the government. Because once the printing presses stopped - and that is the prerequisite for the stabilization of the currency - the swindle would at once be brought to light. Believe me, our misery will increase. The scoundrel will get by. The reason: because the State itself has become the biggest swindler and crook. A robbers' state! If the horrified people notice that they can starve on billions, they must arrive at this conclusion: we will no longer submit to a State which is built on the swindling idea of the majority. We want a dictatorship."

Tip of the tinfoil to ZeroHedge. Read the book here.
Posted by Unknown at 8:36 AM

An war against our freedoms, our stability, sanity and security has been mounted from within (academia, government, church, anti-US groups) and without the US.

The buzzwords - centralize and globalize the economy, re-distribute wealth, unite all religions, are attempts assuming supremacy over the US Constitution and de-nationalize our government.

Our president bows low to the king of Saudi Arabia.

The attempt to replace our democratic republic with oligarchy and facism may succeed, but to try to dethrone God and His Son Jesus Christ, to change His Word and defeat His Church is futile and will fail.

Gosh, Whitestone, and here's me been deluded into thinking for the past eight+ years that the coup d'état came with the December 9, 2000 Bush v. Gore ruling. A coup d'état by overwhelming popular electoral mandate rather than by five to four vote? Some concept.

That quote, if I'm not mistaken was from a statement made by Adolf Hitler, wasn't it?

Do you really think it was a coup, Mr. Lapin? Vice President Gore sure stepped away in a classy way and President Bush did the same when it was his turn. It really is rather miraculous - but I know many people carried a lot of resentment after the 2000 election. This past one was seen as "get-back" on that one. I understand that. Politics of Resentment - it can run mighty deep, don't you think? But I hope we don't just take the next four to eight years off as a consequence either.

No, I don't in fact think it was a coup, BB. My intended point, that was maybe a bit too subliminal, was how easy it is to get carried away and make overblown statements.

Yes, I agree. Sometimes it's not easy to know when people are being serious and when they are just letting off steam. ;-) I know we all get frustrated - just not always at the same time.

It's one of the reasons why we do permit (metaphorically speaking, of course) for people to throw "pancakes" but not "cream pies."

As for me, I'm listening to bit of James Taylor and Yo-Yo Ma and sipping some chai and trying to mellow out a bit as we head into Holy Week. It sure goes a long way in a short amount of time. ;-)