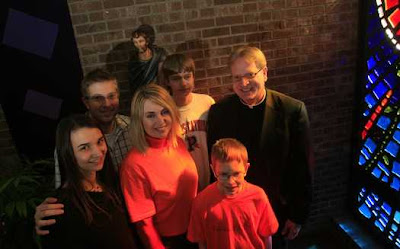 There are few women who can say they are married to a Roman Catholic priest.

And few people who can say their dad is the man Catholic churchgoers address as “Father Steve.”

But Cindy Anderson and her three sons can, and they were among the rush of congregants who gathered for 10 a.m. Mass on a recent Sunday at St. Mark the Evangelist Catholic Church in Goodrich, Mich.

The parish priest is Cindy’s husband and the father of Austin, 24; Steven Jr., 14; and Christian, 11. The Rev. Steve Anderson has been a Catholic priest since 2003, when he was ordained under an exception to the Catholic Church’s celibacy rule for married ministers serving some Protestant denominations.

About 100 married men, mostly ministers in Episcopal churches in the United States, have sought permission from the Vatican to be ordained as Catholic priests since Pope John Paul II allowed it in 1980.

“It does take some explanation, for sure,” said Austin Anderson, an automotive engineer. “People think I don’t know what I’m talking about, at first. ‘Maybe you mean deacon,’ they say. ‘Maybe you mean another denomination.’ ”

Then there’s the joke he hears whenever he explains what Dad does for a living: “Do you call him ‘Father father’?”

The Rev. Ernie Davis, a married priest in the Diocese of Kansas City-St. Joseph since 2002 and a former Episcopal priest, said he is, “Almost universally accepted, and if I’m not, people are too polite to say so.”

But, “Sometimes I am a lightning rod for people who think that priests who took a vow of celibacy ought to be able to get married and remain active in priestly ministry,” he said. “Others need assurance that I’m not dishonoring the gifted ministry of priests and seminarians who are true to the celibate way of life.”

One of the challenges, however, is balancing ministry and marriage.

“Without some balance it could kill a marriage,” Davis said. “My family (wife Valerie Davis and three children ages 23, 21 and 18) keeps me balanced and rooted.

“Sometimes they are my biggest challengers. I love being a husband and father. I do not know what it’s like to be a priest and celibate. I can certainly see some advantages for the celibate priest, especially when I am telling Valerie that I am headed out for the fourth evening meeting in a week.”

For Cindy Anderson, being a priest’s wife has meant a rare and challenging role.

Laura Sullivan, a Kettering University mechanical engineering professor, is one of them. She followed Anderson from his previous parish, Holy Family in Grand Blanc, Mich., to his current posting.

“This is somebody my kids could talk to. Somebody married people can relate to. He brought such a fresh breath of air,” Sullivan said after Sunday Mass.

Valerie Davis teaches theology at Rockhurst High School in Kansas City, where freshman students usually are surprised that she’s married to a priest. But parents and older students “often are conversant with aspects of the Catholic Church’s pastoral provision,” she said.

If anyone is surprised, usually it is a Protestant who is less familiar with the Catholic Church, she said.

Michael Diebold, a spokesman for the Diocese of Lansing, Mich., which oversees Anderson, acknowledged that parishioners have welcomed the novelty of a married priest, a concept that flies counter to the Vatican’s unwavering support for priestly celibacy.

“If there are people who find he’s more approachable because of that reason, then that’s a good thing,” Diebold said. “Not to denigrate all the single priests who are out there, but if there’s a segment of the population that finds that to be a positive in their lives, that’s a good thing.”

Both Anderson and the Rev. William Lipscomb, a Traverse City, Mich., parish pastor who in 1997 was the first married Episcopalian minister in Michigan to be ordained a Catholic priest, say they are not campaigning for an end to Rome’s celibacy requirement.

BB,
Perhaps it's just me, having been raised R.C.,but I just don't get the titillation which so many "Anglicans" derive from former Anglican clergy being received and then ordained in the Roman Church. It isn't as though the Vatican accepted his ordination as valid, he was catechized then presumably re-baptized, confirmed (of course Rome would not have recognized his former baptism and confirmation) and then he was ordained a deacon and priest. The Pastoral Provision is simply a "bait and switch" strategy to lure congregations and their pastors into joining the Roman Church. Will such congregations be provided with married clergy in perpetuity? I very much doubt it. They will be expected to eventually conform to Roman Catholic practice. The Pastoral Provision is seen as a transition phase on the Road to becoming real Roman Catholics. So why do so many "Anglicans" seem to celebrate these situations? Is it perhaps that somehow they feel as though their Church is second class or minor league and that here is the story of another boy from the minor league who has moved-on to the major league? When I left the Orthodox Church and became an Anglican neither I nor my family were required to be baptized or confirmed and I was not re-ordained. My orders were accepted as being valid; the same cannot be said of Rev'd Anderson. What does this say about what he thought he had been before he joined the Roman Church? For those who like to fantasize that Rome will somehow "receive" them in their "orders", clearly you've been inhaling funny incense because it ain't gonna happen. If you want to cross the Tiber you will have to renounce your orders and baptisms as being invalid. I still don't get the titillation, but by the Grace of God I'm a Protestant.

You're mistaken, no rebaptism.

There would be no rebaptism required if they'd gone to the Orthodox Church.

Quite honestly, these reports just make me sad. Sad that they didn't take the step to go all the way back to Orthodoxy.

1662 BCP, I'd be interested to kow why you left the Orthodox Church and become Anglican?

Anam Cara,
Unless you are referring to the OCA, the Antiochian Archdiocese of N.A. or perhaps the Greek Archdiocese of N.A. there most certainly have been reception by baptism and chrismation in accordance with the Pedalion. This is one of the inconsistencies in some of the North American jurisdictions. There are certain cases where oeconomia may be exercised in the reception of converts, but generally Orthodox Canon Law is flouted by these jurisdictions. I lived for two years on Mount Athos and am speaking from the position of strict adherence to the Canons in the Orthodox Church. If one had been received in any other way they would not be communed in most of the Orthodox World. Was the Roman Catholic bishop who ordained Rev'd Anderson given some Papal some temporary dispensation to ordain a married man to the priesthood. If I were still a Roman Catholic I'd be rather troubled by this novel exercise of priviledge.

tdunbar,
If, as you say there was no reception by baptism, then why was it necessary to ordain Rev'd Anderson a deacon and a priest. Please cite for me the particular Roman Canons in regard to this. Does Rome now accept Anglican/Episcopalian baptism but not ordination? Particularly since the advent of women's ordination and episcopal consecration.

From the Catechism, regarding the sacrament of baptism:

IV. WHO CAN RECEIVE BAPTISM?
1246 "Every person not yet baptized and only such a person is able to be baptized."

1271 Baptism constitutes the foundation of communion among all Christians, including those who are not yet in full communion with the Catholic Church: "For men who believe in Christ and have been properly baptized are put in some, though imperfect, communion with the Catholic Church. Justified by faith in Baptism, [they] are incorporated into Christ; they therefore have a right to be called Christians, and with good reason are accepted as brothers by the children of the Catholic Church." "Baptism therefore constitutes the sacramental bond of unity existing among all who through it are reborn."

1272 Incorporated into Christ by Baptism, the person baptized is configured to Christ. Baptism seals the Christian with the indelible spiritual mark (character) of his belonging to Christ. No sin can erase this mark, even if sin prevents Baptism from bearing the fruits of salvation. Given once for all, Baptism cannot be repeated.

1280 Baptism imprints on the soul an indelible spiritual sign, the character, which consecrates the baptized person for Christian worship. Because of the character Baptism cannot be repeated (cf. DS 1609 and DS 1624)

If you really want to know what the RC church teaches about baptism, etc., visit http://www.vatican.va/archive/catechism/ccc_toc.htm

Annie,
Thank you for your citations which I presume are from the most current edition of the Roman Canons. My reference to funny incense is in regard to those who presume to think that they will be received by Rome in their orders. Clearly Rev'd Anderson's orders were not accepted by the Vatican.

If you read this (and I hope you do!)
I'd love to talk with you about why you left the Orthodox Church. It is important to me to understand your reasons...

I often hear of Episcopalians/Anglicans becoming Orthodox, but never the other way.

You an contact me by e-mail from my link.

I most don't understand how someone who is ordained in the Episcopal Church, who professes belief in Jesus as the ONLY way to Heaven, can then become a member, as a priest, of a denomination which doesn't.