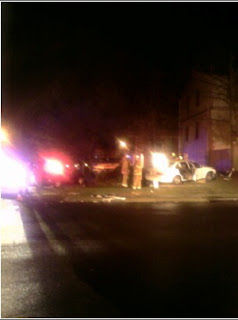 I was just sitting here having dinner and catching up on the news when suddenly there was a crash, a resounding crash outside. At first I thought it was thunder (we're under a tornado watch right now), but then I thought, maybe not.

I grabbed my cell phone and ran outside to see a kid in a pizza delivery car had smashed into a Toyota Avalon right on the corner where I catch the bus every day to the choo choo. People were running out of their houses to see if it was one of their loved ones whose dinner awaited them on the stove. Others were witnesses. I called 911.

Can you describe the cars? The dispatcher asked. It was dark, but I asked her if she wanted me to be more specific and she said yes, so I walked up and looked at the cars and told her, told her the drivers were in their cars and talking to people who had run out of their houses. The pizza delivery boy had been knocked out, but was now on his cell phone. So was the driver of the Avalon, only she couldn't get out of the car. All of the witnesses told the drivers to stay were they are until they could be checked out. Their cars were wreaks and steam was escaping from the hood of the Avalon. I told this to the dispatcher and she told me a firetruck was on its way. I could hear the sirens as I finished the call and in a moment they arrived at the scene. 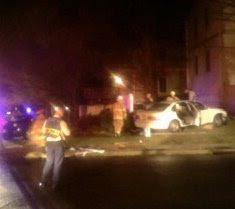 Still more people - mostly women - came pouring out the houses to see if was one of their loved ones who had crashed. As I walked back to another corner as the emergency personnel arrived, a man jumped out of another car that had pulled up on the road behind the flashing lights of the emergency vehicles and ran to the driver's side of the pizza car, his face looking shocked as he passed me. I knew right away it was the boy's father.

In another moment another, somewhat older man, came running up the road - he had pulled over and jumped out his car and ran past me toward the Avalon, where the woman inside was now being attended to by the fire fighters who had to use the "jaws of life" to cut her out of her vehicle. I saw him shake hands with one of the witnesses who stood with him.

One of my neighbors came up beside me, also fearing it was her husband. Other neighbors stood around, speaking mixtures of Spanish and Korean and English as our faces reflected the red and white lights on this oddly warm and rainy night in March. "Are they all right?" one neighbor asked and I told them they were conscious and had been on their cell phones calling loved ones who had come quickly. My neighbor nodded, relieved.

As I write this now I can hear the cars being dragged and crunched off the embankments and loaded onto wreckers to be hauled away. Traffic is moving again as loved ones finally make it home and the rain falls steady now, building blinking puddles of red and white.

LATER: Here's a short "film" I made tonight, using my cell phone video:

UPDATE (April 6) - Tonight I saw an old friend and long time member of my home group Bible study starting back around 1990. We saw each other late this afternoon at a worship service at The Falls Church and I noticed she had a broken arm. When she told me she had been in an a car accident and where it was, I jumped back completely startled. "I was there!" I exclaimed.

She was the driver of the Avalon.
Posted by Unknown at 8:04 PM

Praise God it reads that the lady ant pizza driver will heal from this evening and only the cars are totaled. It's way my professor called a "limit situation" when suddenly we remember how fragile and finite we are in the end.

I give thanks to God for the sparing of life and the first responders who chose to serve our communities.

It was too bad about the crash, and good that there were no serious injuries, but what a way cool video. Great music, great job of editing, great graphics! I liked it!