Just in - Diocese of Quincy Requests Oversight; Joins seven other Episcopal Dioceses in appeal to Canterbury 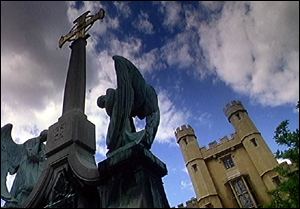 Special synod leads to district joining seven others in distancing themselves from Episcopal Church in U.S.

of the Journal Star

GALESBURG - A special synod of the Episcopal Diocese of Quincy decided Saturday to seek oversight from an Anglican province other than the Episcopal Church. About 100 priests and deacons and 50 lay people overwhelmingly approved resolutions that "further distance themselves from the troubled Episcopal Church in the U.S.," according to a diocesan news release.

The request, made during the meeting at Grace Church in Galesburg, will go to the archbishop of Canterbury and leaders of the other Anglican Communion provinces.

The Diocese of Quincy joins seven other U.S. dioceses, including the southeast Illinois Diocese of Springfield, that have asked for alternative oversight since the Episcopal Church's triennial convention in June failed to declare a moratorium on election of noncelibate homosexual bishops. The moratorium had been requested by Archbishop of Canterbury Rowan Williams and other Anglican primates.

Bishop Keith Ackerman said the convention's actions could cause the U.S. province to be expelled from the 80 million-member Anglican Communion. The west-central Illinois diocese's constitution requires it to remain in good relationship with the other

The bishop said the day's focus was on "how can we stay in the Anglican Communion?"

The Rev. John Spencer, president of the diocese's standing committee, said another reason for the request was because of the theology of Presiding Bishop-elect Katharine Jefferts Schori. The Nevada bishop, elected presiding bishop of The Episcopal Church at the June General Convention, has approved blessings for same-sex unions in her diocese and also voted in 2003 to approve the election of Bishop Gene Robinson, an openly noncelibate homosexual, as bishop of New Hampshire.

"Quincy and the other dioceses are unwilling to accept the leadership of the controversial Schori," the news release stated.

The Diocese of Quincy legally is still a part of The Episcopal Church, Spencer said. Alternative oversight would mean a presiding bishop or archbishop other than Schori would consecrate a new Quincy bishop or would mediate disputes.

Synod delegates also "passed a strong resolution affirming the historic faith and practice of the Christian Church and repudiating actions of the Episcopal Church's national leadership that have sent the denomination into turmoil over the last three years and has driven many Episcopalians around the country to other churches," according to the news release.

Ackerman said that despite the controversial nature of the issues, a sense of unity and peace prevailed over the special synod.

"This diocese is not noted for reacting," Ackerman said. "It's noted for prayer and acting."
Posted by Unknown at 10:57 AM