This is the first time I have seen a clear version of the Hard Rain Concert from May 23, 1976.  The versions I've seen have been worn copies of copies from old VHS tapes.  The concert was shown on television in 1976 and that was it. It's never made to DVD and the YouTube versions I've seen over the years were very rough. 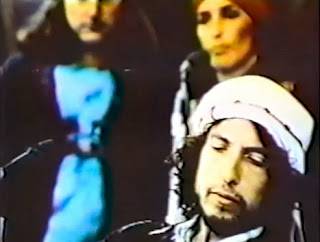 The period of 1977-1978 is a rather dark time, for the country and for Dylan.  We see the cubistic film Renaldo and Clara released for five minutes, never to be seen again (unless it's more of the grainy rough versions that come and go on YouTube).  His marriage ends. Elvis dies. Dylan tours Japan and releases Street Legal.  The period might be called his Neil Diamond Period - he might have been aiming for the Vegas Elvis, but got as far as Diamond.  He was missing something.

Then in November 1978, someone threw a cross up on the stage during his concert.  Dylan picked it up and put it in his pocket. "I brought it backstage and I brought it with me to the next town, which was out in Arizona," Dylan said in a 1979 interview. "I was feeling even worse than I'd felt when I was in San Diego. I said, 'Well, I need something tonight.' I didn't know what it was. I was used to all kinds of things. I said, 'I need something tonight that I didn't have before.' And I looked in my pocket and I had this cross."

By 1979, he would release Slow Train Coming.

With that all in mind, it is interesting to look back at this concert.  He does not perform like this anymore.  He did not perform like he did during most of the recorded Rolling Thunder Tour.  His earlier personas (masks?) - the hipster, the protester, the vagabond, the voice of a generation - are far behind him. 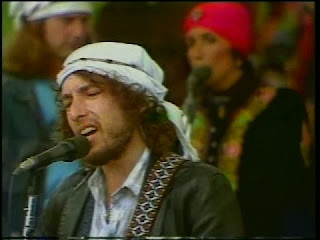 To watch this concert in its entirety for the first time - we see one angry young man.  He howls through the songs.  There is confusion on stage, what is he doing, who he is playing to, why is he up there - and what are the rest of those people there for - even Joan Baez, who seems as though she made a wrong turn on her way back to Macy's in Manhattan.

Whatever playful joy we see in Dylan over the years - well it does not show up here.  What we get here is pain.  It is an honest performance - and sometimes honesty is not what people want.  The critics didn't want it and this show has been buried or decades.  He's not going to work for Maggie's Farm no more, he howls, he's had it.  Done.

When he returns a year later, he fires all his friends, brings in Vegas-style back-up singers, and seeks his inner-Elvis (or what killed him), like it's all style and not soul.

The soul.  We get soul here and it's shattered. Watch if you can his Idiot Wind performance. He seems to be wailing at himself, filled with scorn and shame.  Maybe he is wailing at others - but it seems like the ugly rage is one the inside.  He pulls it back in the in the finale, bring us a a pleading of with Knocking on Heaven's Door. "Mama, take this badge off of me," he pleads, "I can't do it anymore." Tragic is not too strong a word.

Amazing.  In a few years he will sing a brand new song. He'll write those songs.  And he still sings those songs.  This "Dylan" will be gone.  Can't say I've seen him since.


Three years later he writes a brand new lexicon of music.  Here Gospel singers reflect and perform on the music he would only a few years after Hard Rain:


The iron hand it ain’t no match for the iron rodThe strongest wall will crumble and fall to a mighty GodFor all those who have eyes and all those who have earsIt is only He who can reduce me to tearsDon’t you cry and don’t you die and don’t you burnFor like a thief in the night, He’ll replace wrong with rightWhen He returns
Truth is an arrow and the gate is narrow that it passes throughHe unleashed His power at an unknown hour that no one knewHow long can I listen to the lies of prejudice?How long can I stay drunk on fear out in the wilderness?Can I cast it aside, all this loyalty and this pride?Will I ever learn that there’ll be no peace, that the war won’t ceaseUntil He returns?
Surrender your crown on this blood-stained ground, take off your maskHe sees your deeds, He knows your needs even before you askHow long can you falsify and deny what is real?How long can you hate yourself for the weakness you conceal?Of every earthly plan that be known to man, He is unconcernedHe’s got plans of His own to set up His throneWhen He returns
B. Dylan 1979