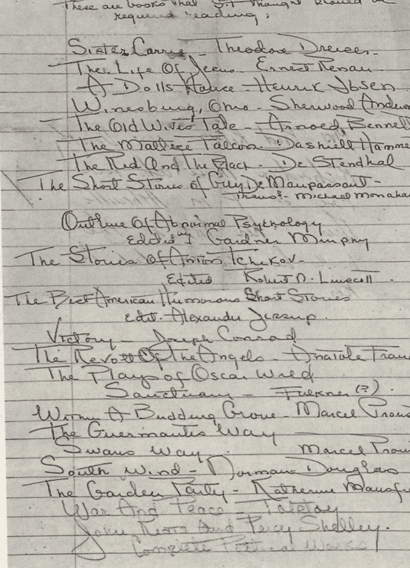 “These are books that Scott thought should be required reading,” wrote the nurse assigned to care for F. Scott Fitzgerald, author of one of the greatest novels in American literature, The Great Gatsby.

A photograph of the list, copied down by Fitzgerald's nurse, Dorothy Richardson, appears on Open Culture.  The article comments:

Fitzgerald had moved into Asheville’s Grove Park Inn that April after transferring his wife Zelda, a psychiatric patient, to nearby Highland Hospital. It was the same month that Esquire published his essay “The Crack Up”, in which he confessed to a growing awareness that “my life had been a drawing on resources that I did not possess, that I had been mortgaging myself physically and spiritually up to the hilt.”

Fitzgerald’s financial and drinking problems had reached a critical stage. That summer he fractured his shoulder while diving into the hotel swimming pool, and sometime later, according to Michael Cody at the University of South Carolina’s Fitzgerald Web site, “he fired a revolver in a suicide threat, after which the hotel refused to let him stay without a nurse.

He was attended thereafter by Dorothy Richardson, whose chief duties were to provide him company and try to keep him from drinking too much. In typical Fitzgerald fashion, he developed a friendship with Miss Richardson and attempted to educate her by providing her with a reading list.”

It’s an idiosyncratic list. Fitzgerald appears to have restricted his selections to books that were available at that time in Modern Library editions. At the top of the page, Richardson writes “These are books that Scott thought should be required reading.”

So BB what are your must reads?