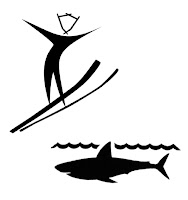 Yes, she's gone and done it - her article on Bob Dylan reads as an inadvertent satire (wonder if she's seen the Newport videos?), and we find yet again a bitter reminder that when superficial commentators take a minute, just a minute to consider Bob Dylan they find themselves on their own motorcycle in midair.  It appears that there are some folks crica 1966-2011 who have not yet landed, they are still up there.

And Maureen Dowd now seems to be right up there with them.  If she could, she might have been seen backstage in Beijing last week with her own fire ax pushing the hapless Pete Seeger aside so she can chop the Beijing cables herself.

Bob Dylan is consistently turned into a blank canvas for each successive generation so that when they heave their own cultural paint onto him, they then whine when it doesn't stick.

Here in this article she throws a tantrum because her canvas of Dylan was all wrong - wrong, wrong, wrong, wrong, wrong - and then blames him for it!  Does she not know?  Has she not heard?  He doesn't do "finger-pointing" songs.  He told them all to take that job and stuff it and that started when?  Why,  in 1963.  Was anybody listening?  And no, he hasn't sung Hurricane in decades.  The last time he did, he had painted his own face for them.  Yes, the erstwhile aging hippies do pop up at his concerts from time to time, shouting Hurricane over and over and no, he doesn't even blink an eye.

He rarely does Blowin' in the Wind either and when he does you find yourself passing folks after the show like I did at the Merriweather Post Pavilion a few years back asking one another in bewilderment if he had actually sung, Blowin' in the Wind that night, and when told that he had indeed, they comment, "He did?"  If Maureen Dowd wasn't so busy revving up her motorcycle for the big jump, she might have paused last year when Dylan did offer one of his rare performances of The Times They Are Changin' at the White House of all places, while a majority in the room seemed rather stunned that he had turned their defiant anthem of self righteous contempt into a wry and somewhat regretful lament that seemed to say (and who can say for sure?) well, you know, may be we were all young and stupid after all.

So in honor of this forty-years-too-late-shark-jumping-tantrum (did she even see the playlist from the Beijing show where he opened with Gonna Change My Way of Thinking?), we offer this little selection that won him the Oscar (which in his winking way is now not so serendipitously ducktaped to his on-stage amp) and hope that someone somewhere will find the poor lady a binky.

BB.
"Bob Dylan's Dream" remains my favorite of all his songs and continues to be relevant in my life. The effort to hold unto friends from the past has not stopped them from getting off along the way."And at the next stop, I'll be gone, just another vagabond."

The only singer in the world who can make me appreciate Streisand.

No Binky for YOU, Maureen!