LIVE from the Anglican District of Virginia Synod 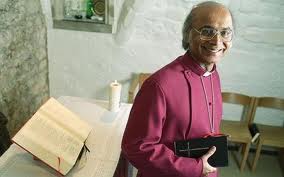 Bishop Nazair Ali strongly critical of proposed Anglican Communion "standing committee" calling it outside the apostolic faith and ministry.  Gives overview of of Anglican mission and ministry firmly rooted in the Bible and Apostolic ministry.

Greetings from lovely Herndon, Virginia - it's a bright and sunny and blue sky day here as delegates fill the Church of Epiphany for the annual synod of the Anglican District of Virginia.  As I write now, Bishop Michael Nazir Ali, former Church of England bishop of Rochester and candidate for Archbishop of Canterbury, is speaking to the Synod.  He is speaking on what is radical discipleship in the church today.

We have found our selves in the situation where the Anglican Communion has not been able to decide together those things we need to decide together, as well as exercising discipline together in love, for the sake of restoration - there can be no drawing back at every level of the church.

He also said that even in meetings such as GAFCO, we must model working together to make decision, including working with our bishops.

He also spoke of the Anglican Covenant - the draft that has successively been brought forward has excellent theology, but when we come to Section IV all that disappears.  We now have "an animal" called a "standing committee" - which he, besides his best efforts, does not understand.  Can not see how any bodies any where will ever agree on anything following the present draft of Section IV.

UPDATED: The church must be: 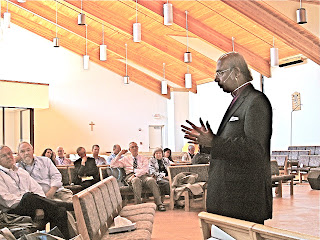 We must say that we are people of revelation, that is to say that we do not believe that our faith is simply about the human expression for religiosity (for example, the values of the English people).  No, it is the values of the Gospel.  This revelation is inscribed on human hearts and minds, in spite of the fall of human rebellion, it is still there.  It is inscribed in the nature of the universe.  Christians should not make the mistake that Hawking makes between what is descriptive and what is the cause.

Jesus has revealed himself in the history of people, Bishop Nazir Ali said.  If you want to know whether a vision or word is from God, you test it against the revelation of Jesus Christ.  We are also people who want to relate this revelation to the world.

He spoke of what he felt was the most remarkable spiritual experience at GAFCON, that he didn't expect it, but found it.  The future is not to get into structure and organization and institutionalization, but to be aware of how God has constant renewed the church to move - movements that change the way we do things.

If we say we are people of revelation, if we say we relate that revelation to God's world around, and if we say we are people of the renewal, that means that we are saying the great tradition in which we stand, where the scriptures are the norm, they provide the motor for the mission of the church - nothing more and nothing less.  We are saying as people of the Bible, we are not simply to come together in holy huddles (comforting as that is) - not just about that, but to be driven out into the world for the sake of the Gospel.  This may be God's way of releasing us for God's mission as he has done in the past.

10:30 a.m. - Bishop Nazir Ali is now taking questions from the synod.  The Church is a servant to the world, not it's master.  Bishops, as he calls it Apostolic ministry, are to be servants - not the master.  Anglican tradition is unique in bringing together the necessity of the sufficiency of the scripture and the task of the apostolic ministry in the service of the scriptures.

The sign of hope - the movements he sees are underway, student movements, renewal movements.

He is now answering questions as diverse from Melanie Philips commentary on prolife issues, to the proposed changes in English law to include recognition of Sharia laws in Great Britain.

The Q&A was followed by the celebration of the Eucharist, Bishop Martyn Minns celebrating, Bishop John Guernsey leading the prayers, Bishop Dave Bena preaching on the Holy Spirit, and Bishop Michael Nazir Ali pronouncing the blessing.

It is interesting to reflect on Bishop Nazir Ali's exhortation  on the "apostolic" ministry as the second defining element of the Anglican tradition (and not the Book of Common Prayer).  Here in Virginia, the ministry of bishops has been received (though after the disestablishment of the church following the American Revolution, a significant majority of parishes abandoned the episcopal ministry in favor of a less structured local model that became to the most part Baptist congregations.  Even with that, when the Episcopal diocese formed, the bishop's role was great reduced compared to the role as defined in the Church of England.  Even today amongst Virginia evangelicals, the ecclesiastical office would not be named to be nearly on par as scripture, though Bishop Nazir Ali makes a compelling case for it, when bishops fulfill that role.

It is also interesting to note his opposition to the so-called "standing committee" in the Anglican Communion which basically seems to want to usurp the role traditionally held by the primates and perhaps even the ACC and Lambeth.  It does seem to be elevating itself over the other instruments of unity as defined in the Windsor Report.  We've all ready seen rather questionable practices from the current self-created "Joint Standing Committee" which all ready seems to be morphing into the Standing Committee and how easily it has been to manipulate the rules to keep the status quo, according to the Anglican Communion Institute.  The result has been the resignation of the Global South primates from that committee - not something to take lightly.

LATER: As so often happens, these gatherings are a fun time of seeing old friends and making new friends.  Each year the synod gets bigger and this year is no exception. This synod will see a resolution calling for a Constitutional Convention next year as the ADV prepares to join the Anglican Church in North America as a diocese and elect its own bishop. Here in this photo on the right was have Karen Rummel, Alpha DC Regional Director. with Simon and Caryn Dixon who have just come over from Holy Trinity Brompton, London, to join the staff of The Falls Church.
Posted by Unknown at 10:24 AM

BB,
Will you be posting the full text of Bp Nazir Ali's address later?

"......the role traditionally held by the primates". The first Anglican primates' meeting was called in 1978, BB, for “leisurely thought, prayer and deep consultation”. It has no traditional role to usurp. The Apostolic Ministry as a defining element of Anglicanism may be little appreciated among Virginia evangelicals, but it has been a pillar of the Church of England since its 1559 foundation.

Truly a beautiful Saturday on so many levels! Throughout, I was reminded of the words of the Psalmist:
Behold, how good and pleasant it is when brothers dwell in unity!
Regardless of whether we were in the midst of worship or parlimentary procedures, the event was permeated with a spirit of Love for the Almighty and love for one another.
None of us know what the outcome of these tortured lawsuits will be. And, whether Epiphany remains an ADV house of worship, or is reduced to a stripmall or mosque, the spirit that was manifested Saturday will not en extinguished. I pray it becomes the tinder of a next Great Awakening