This has got to be one of the oddest cases ever.  From here: 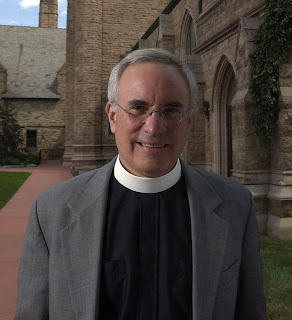 Since 2009 Armstrong had faced 20 counts of felony theft, totaling $392,000, allegedly taken from his own Grace Church and St. Stephen's Parish.

The diocese accused him of criminal conduct, but most St. Stephen's parishioners supported Armstrong's denials of wrongdoing. Most also joined him in breaking away from the Episcopal Church in May 2007 to join theologically conservative Anglicans opposed to the ordination of openly gay or lesbian priests and same-sex marriage.

Armstrong, 61, and his attorney, Dennis Hartley, have said in statements and interviews recently that the charges were reduced to one "fictitious" count of misdemeanor theft. They called it close to a dismissal.

"It is still his contention he did nothing wrong," Hartley said Monday.

Armstrong and Grace Church issued a statement Saturday to VirtueOnline, self-described as "The Voice for Global Orthodox Anglicanism," saying the agreement vindicated Armstrong and demonstrated that "the courts are not the place to deal with theological differences."

Armstrong posted a follow-up entry: "Bottom line here is that they started with 20 felony counts and we walked out of the courtroom with a misdemeanor."

However, Thiebaut said it was "a fairly complicated plea agreement" with more to it than a single misdemeanor count.

According to the plea agreement, obtained by The Denver Post, Armstrong pleaded "no contest" to one class-three felony, the theft of $15,000 or more. The other 19 charges were dismissed.

The sentence for this count will be deferred for a period of four years. If he complies with terms set by the judge, no conviction will be entered.

Armstrong also entered an Alford plea, which means pleading guilty with a protestation of innocence, to a single misdemeanor charge. The agreement states there is no factual basis to the misdemeanor charge, but the defendant pleads to it to obtain the benefit of the plea agreement.

One notes a dramatic difference between Armstrong's statement (one misdemeanor) and the facts (pleading no contest to a felony).

As I understand this, the plea is part of a process that, when complete, will have the final outcome of a conviction for a misdemeanor being the only conviction of record. That will be the essential final legal fact. The difference between having a misdemeanor on ones record and being a felon is major. The plea negotiations are part of the process, but not the final result of record, assuming Armstrong complies with all provisions.

One misdemeanor AND a felony count, BB. On the felony count, Armstrong will be placed on four years' probation. Should that probation be violated, he will be a convicted felon, facing four to 12 years in prison.

Isn't the whole thing odd? The story changes depending on who you talk to. All the parties seem to have a different way of explaining it - from the finger-wagging diocesan officials (PRISON, gosh darn it!), to the bewildered prosecutor ("it's complicated"), to the shoulders shrugging judge (next!), to the relieved defendant - who does seem sincerely relieved. The fingers continue to point, shoulders continue to shrug, and a public shakes its head.

Ah, some clarity at last!

Here is the actual court document of the plea agreement. Read it for yourself. This does not seem to be the trivial matter that Armstrong is making it out to be in his on-line comments and his communications with his parish.

"Armstrong's camp released incorrect information, claiming that Armstrong had only pleaded "no-contest" to a misdemeanor that carried no possible jail time and minimal fines. The error was repeated as fact in other media outlets, alongside reports that the breakaway church Armstrong now leads, St. George's Anglican Church, was in good cheer."

I am considerably surprised that this issue has any tinge of moral ambiguity to it at all. The comments here and elsewhere seem to break down along the lines of the pro and anti TEC divisions. I would think using church funds (trivial or non-trivial amounts - and this was non-trivial) for private purposes would be an unmitigated no-no with secular legal consequences. It sounds like a very reasonable plea bargain for the defendant. I can imagine that there is a lot of damage all around on this one.

Actually, Scout, if you go to Matt Kennedy's Stand Firm thread on this topic, you will see that this in not a straight "party lines" issue

Fair point, Rabbit, but I have seen a surprising amount of schismatic divide on how people react to this issue. I really don't see where the grey area on this is, and I am one of those people who is fairly ready to believe that there are a wide variety of issues that confront the Christian community that do not have clear causes or resolutions.

1 Timothy 3:2-7: "Now the overseer must be above reproach, ... respectable, ... not a lover of money. He must also have a good reputation with outsiders, so that he will not fall into disgrace and into the devil's trap."

It appears this unfortunate man has disqualified himself from leadership in the Church.

By Anon at 3:46PM's comment, if you apply the standard equally, KJS and quite a few other bishops need to remove their miters.